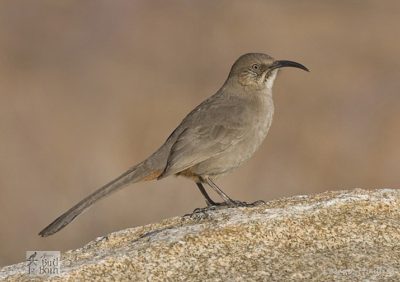 One of the guidelines for participating in the Great Backyard Bird Count is that you can bird anywhere — you are not restricted to just counting the birds you see in your yard. This rule creates greater flexibility for participants, and certainly bolsters the number of checklists submitted and the number of birds reported.

I participated in the Great Backyard Bird Count last Saturday by going to the ‘Thrasher Spot’ with a dear friend and fellow birder. I got up before 4:30 a.m. and was on the road by 5 a.m. The thrasher spot is about 30 miles west of downtown Phoenix, at the intersection of Baseline Road and Salome Highway.

At first glance, looking at the surrounding habitat, you would probably wonder why anyone would go birding in that particular spot. The general appearance of the area would not give anyone the impression that this would be a really great place to go bird watching.

However, this is a really good place to go birding to see specific target birds — namely thrashers. We arrived right at sunrise, and within just a minute or two of getting out of the car we had a brief look at a Bendire’s thrasher. It wasn’t a satisfying look, but we had already tallied our first thrasher of the day.

We immediately started meandering through the desert scrub listening and looking for thrashers. Our first breakthrough came probably about 30 minutes after arriving, when we finally heard one and then later two thrashers singing the same song, so we knew they were the same species.

Thrashers are amazing vocalists! They sing a complex song that is fluid and beautiful. When we started to hear the first one, we began walking in the direction of the sound. Remarkably, we probably walked more than 300 yards before finding that bird. It was amazing how far away we were able to hear the bird singing. Our bird was a LeConte’s thrasher, and we were able to get the scope on it and get great looks.

The next thrasher we heard was west of the Salome Highway. Unfortunately, another birder was already in pursuit, and I did not approve of his tactics. He was using a recording of a wren’s alarm call to stir up the thrasher, and he was moving very quickly instead of slowly stalking the singing bird. Fortunately we saw the thrasher — a crissal thrasher — and we got it in the scope.

From there we walked further west and south until we came across a pocket of sage thrashers, probably at least six of them. They weren’t singing, but they were perched up on low shrubs, and they were flying around making it possible to see so many of them. We were able to get the scope on at least four different sage thrashers and got great looks at them.

At this point we started making our way back to the car when we found a pair of Bendire’s thrashers down on the ground using their beaks to dig around in the dry dirt as they looked for food. Once again, we were able to get them in the scope — it was amazing to get such good looks of this uncommon species.

In addition to four thrasher species we also saw sagebrush sparrows. It was a very fruitful day! While we did not see a large variety of bird species, we saw quality species — target birds that are hard to find just anywhere. This is definitely a good time of year to look for thrashers, as they are singing to attract a mate and define and defend their territory.