Birding: My big birding day in the Prescott area 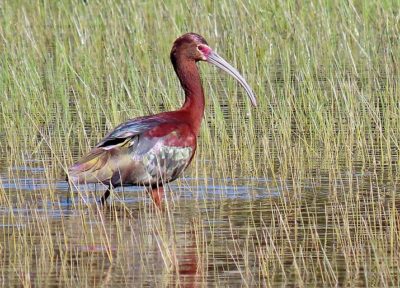 A white-faced ibis we saw on Monday, April 27, 2020, at Willow Lake during our “Big Day.” (Everett Sanborn/Courtesy)

Have you seen the movie, “The Big Year”? Whether you are a birder or not, it is a must-see. The movie is based on a true story of three serious birders on a quest to set a record—to see the highest number of bird species in North America in a calendar year. The movie stars Steve Martin, Owen Wilson, and Jack Black—as hard-core bird watchers. It is a great comedy!

I have never attempted a Big Year, as I would probably need to be retired. AND, it would take a lot of money—traveling all over North America chasing rare birds. While a Big Year is not in my near future, I have tried to do smaller, more realistic events such as a Big Day. On Monday of this week, two friends and I did a Big Day in the Prescott area.

The best way to maximize the number of species observed in a given day is to visit as many different habitats as possible, as each habitat has species unique to that area. For our Big Day, we needed to visit grasslands, chaparral, pinyon juniper, coniferous forest, riparian, lakes, wastewater treatment plants—even residential and urban areas.

The problem with putting together a Big Day is that the best time of day to see the most species is early in the morning—this time of year it is probably between seven a.m. and nine a.m. The problem is, I identified sixteen different stops over a nine-hour period. There was no way possible to visit each birding hot spot during peak birding time.

I agonized over the route—but finally settled on an itinerary with timed stops allowing for travel time between each birding area. We started at 6:00 a.m., and our first stop was at 6:05 a.m. The next stop was at 6:20 a.m., then 6:35 a.m., 6:40 a.m., etc. However, it wasn’t long before we started to get behind schedule. The birding was so good, it was hard to rush our time in some areas.

For example, I wanted to be at Watson Woods by 7:15 a.m., and my next stop was at 8:20 a.m. in The Ranch. However, we got to Watson Woods late, and the birding was so good, we spent longer there than I had planned. For example, we saw eight species of warblers just in Watson Woods—yellow, Lucy’s, yellow-rumped, common yellowthroat, black-throated gray, Townsend’s, Wilson’s and orange-crowned.

Our morning stops were very productive—after just six stops, we had already seen 54 species. There were some nice surprises along the way. For example, we made a stop south of Prescott to see Lewis’ woodpecker, and ended up seeing Virginia’s warbler and black-chinned sparrows too.

As you know, our weather has gotten much warmer just in the last week. As we approached mid-day and the temperatures climbed up into the 80’s, our clip of finding new species began to fall off. We spent part of the afternoon in a grassland habitat and we added Bullock’s oriole, horned lark, western meadowlark, ash-throated flycatcher, northern mockingbird, Say’s phoebe and Brewer’s sparrow.

On our way back into Prescott we actually stopped at a few earlier stops a second time trying to pick up species we’d missed in the morning. For example, we picked up wood ducks and bridled titmice at Granite Creek which we missed earlier.

Unfortunately, we ran out of time, and there were two areas we didn’t get to at all. We fell a little short of our goal of 100 species but still ended up with 88 species and had a wonderful day.

Until next week, Happy Birding, and be well!

Eric Moore is the owner of Jay’s Bird Barn, with two locations —Prescott and Flagstaff. If you have questions about wild birds that you would like discussed in future articles, email him at eric@jaysbirdbarn.com.