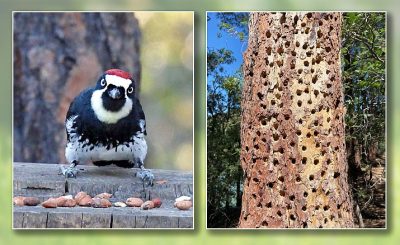 Several months ago, I was approached by a member of the Las Vegas Red Rock Audubon Society Chapter and asked if I would be willing to lead a guided bird walk for their group to Butterfly Springs, on Mingus Mountain. As you might imagine, I agreed. So, for the second week in a row, I had the opportunity to go birding on Mingus Mountain.

Fortunately, this past week, the mountain had dried out a lot and we were able to hike up the canyon where Butterfly Springs is located. We had a lovely, birdy day and saw several species that were missed on the same bird walk a week earlier.

There were so many western bluebirds! We also saw both Steller’s and Woodhouse’s jays. We saw four species of hummingbirds — broad-tailed, black-chinned, Anna’s and rufous. We saw three species of nuthatch — white-breasted, pygmy, and red-breasted, and five warbler species — yellow-rumped, Grace’s Townsend’s, hermit, and Virginia.

It is interesting to compare the results of the two bird walks that were less than a week apart. It just goes to show the unpredictability of birds, when and where they might show up. On the first bird walk, we saw a Bald Eagle, a red-tailed hawk, and a zone-tailed hawk. On my second visit to Mingus, I didn’t see a single bird of prey species.

The very next day I led a Jay’s Bird Barn-sponsored bird walk to Goldwater Lake. It was another lovely day, and we saw a delightful array of bird species. Some of our highlights included a Bald Eagle, western bluebirds, and acorn woodpeckers. There are several good examples of granary trees at Upper Goldwater Lake that are used by acorn woodpeckers.

Not familiar with a granary tree? Acorn woodpeckers have the unique biology of caching food during times of plenty to be used in lean times. The woodpeckers excavate small holes in the bark of ponderosa pine trees and store one acorn in each hole.

Acorn woodpeckers are very industrious. Working cooperatively in family groups, they harvest acorns as they ripen, and deposit the acorns into their granary for safe keeping. Placing acorns in a hole with a snug fit reduces the likelihood that a thieving jay or squirrel will steal the acorns.

Unfortunately, when a tree dies in the Arizona Central Highlands area, we are encouraged to cut it down to reduce the risk of wildfires. However, dead ponderosa pine tree snags are a favorite granary location for acorn woodpeckers.

In the absence of suitable dead trees, the woodpeckers will frequently use wood-sided homes as their granary. As you can imagine, this is not appreciated by homeowners. It is estimated a granary in a large ponderosa pine tree can have between 40,000 to 50,000 holes for storing acorns.

You can see why homeowners don’t appreciate the woodpeckers “attacking” their homes, as they can do an extensive amount of damage in a short period of time. The moral of the story is to leave up some dead ponderosa pine tree snags.

On Labor Day, I did my own version of a triathlon, substituting kayaking for swimming, and hiking for running. In the morning I biked the Peavine Trail, mid-day I hiked the Goldwater Lake Loop Trail, and later in the day I kayaked at Watson Lake. While the water level in the lake is coming down, I was able to kayak up Granite Creek all the way to the red foot bridge, which spans the creek.