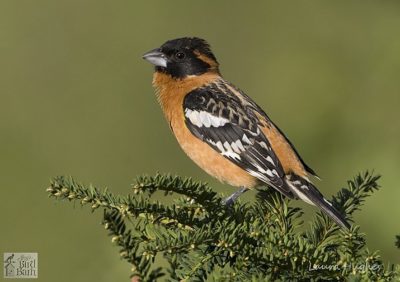 Be on the lookout for black-headed grosbeaks, a frequent spring visitor at seed feeders. (Jay’s Bird Barn/Courtesy)

Did you know that the second Saturday of May each year is designated as World Migratory Bird Day? This is a worldwide effort to further migratory bird conservation by focusing on the urgent need to protect migratory birds and their habitats. This past week, I personally witnessed the impact of spring migration with the ebb and flow of migrating birds coming and going at Willow Lake.

One day last week someone reported a cattle egret at Willow Lake. This is an unusual visitor to the Prescott area, and I had yet to see this species this year, so I headed out to the lake to find it. By the time I got out there, it had already moved on. However, I did have a delightful ‘surprise’ when I saw two gull-sized Caspian terns! This was totally unexpected, and it was a happy discovery.

I went back to Willow the next day — the Caspian terns were gone, but I saw a lone American white pelican, several Franklin’s gulls and ring-billed gulls. I also saw long-billed dowitchers, a greater yellowlegs, white-faced ibis, least sandpipers, and a good assortment of ducks, including northern shoveler and green-winged teal.

I went back to Willow the following day — the pelican was gone, and the shoveler and teal had apparently moved on. However, I found four Wilson’s phalaropes. A few Franklin’s gulls were still hanging on, as were the wading shorebirds.

On Monday of this week, a customer emailed me a picture of a Forester’s tern at Willow. I went out to the lake the same day, but didn’t find it. Again, it was already gone. The ibis were still there, but the dowitchers and the greater yellowlegs and least sandpipers were all gone as well.

The very next day, I was out again and visited not only Willow Lake but also Watson Lake, Watson Woods and the wastewater treatment facility. What an amazing day. In less than five hours, my friends and I documented 70(!) species, including a few surprises. We saw two Peregrine falcons, a Bald Eagle, red-tailed and Swainson’s hawks, a lone female hooded merganser (this is a species that should be long gone by now), a green heron, a pair of redheads (guys, this is a species of duck), a Wilson’s snipe, marsh wren, American goldfinches and black-necked stilt.

We also saw five swallow species: tree, violet-green, northern rough-winged and barn; and five sparrow species: white-crowned, Brewer’s, lark, Savannah and chipping. Needless-to-say, both the variety and number of birds occurring at our local lakes changes every single day this time of year.

If you feed birds in your yard, you have probably noticed a significant shift in species. Spring and summer birds such as lazuli buntings and black-headed grosbeaks are now showing up at seed feeders. Surprisingly, I still have a good number of Cassin’s finches and pine siskins in my yard. It is certainly time for these species to be on the move. I’ve also heard a green-tailed towhee in my yard, so I know they are around even though I haven’t seen one.

All of these examples underscore the reason this Saturday is World Migratory Bird Day. I encourage you to get out and go birding and take in the wonder of ‘new’ birds each day. This is one of the allures of birding. You never know what you might see when you go birding. It literally can change by the hour, not just by the day or week.