Birding: Looking for yellow-billed cuckoos is driving me crazy 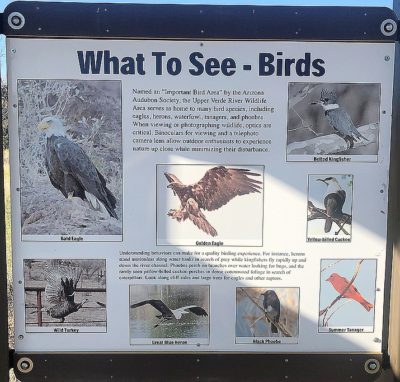 This is a photo of one of the signs from the Upper Verde River Wildlife Area, highlighting some of the bird species that can be seen there including the yellow-billed cuckoo — which I didn’t see. (Eric Moore/Courtesy)

We’ve all heard the expression of someone being a little ‘cuckoo’, or ‘going cuckoo.’ I have been a little obsessed with cuckoos myself — yellow-billed cuckoos that is.

I have been diligently recording my bird sightings into eBird this year, and have seen 246 species in the state of Arizona so far.  In spite of several attempts, I have yet to see a yellow-billed cuckoo.

It can be very challenging to find cuckoos in riparian habitats, even if one knows where to look for them.  First of all, they are a late migrator. Oftentimes, they don’t show up in Arizona until June. Then there is the issue that they are just an uncommon bird, and there are not a lot of them out there.  Making matters worse, they are skulkers, and are proficient at disappearing into the foliage of deciduous trees.

Timing is a critical factor when it comes to seeing specific species, as there is sometimes a narrow window when the species occurs in our state. I am running up against a time constraint that is beyond my control in my efforts to see a yellow-billed cuckoo this year. Before long, they will be headed south.

I keep seeing reports of yellow-billed cuckoo sightings posted in eBird, but all of my efforts so far have come up empty-handed. This past Saturday, I went to the Upper Verde River Wildlife Area, north of Paulden, and spent several hours birding along the river in an area that is a known cuckoo spot. No luck. I didn’t even hear one. However, I haven’t given up, and I am still hoping to see one before they get on their way.

In spite of my failed attempt to find a cuckoo, I had a wonderful morning, and saw a good variety of birds.  Here are some highlights from my time along the Verde River:

Eric Moore is the owner of Jay’s Bird Barn, with two locations in northern Arizona—Prescott and Flagstaff. Eric has been an avid birder for more than 50 years. If you have questions about wild birds that you would like discussed in future articles, email him at eric@jaysbirdbarn.com