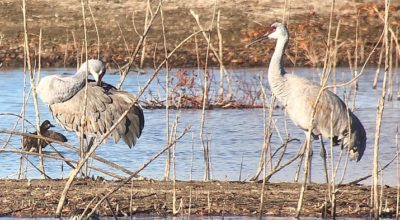 As the owner of a backyard wild bird and nature store, I hear a lot of “bird reports” from customers, such as, “I just saw a crane out at Willow Lake!” I know what they thought they saw, but what they really saw was probably a great blue heron, because we don’t get cranes in Prescott. Right?

Well, yes, that is true, or, at least it was true until this past Friday.

We have a lot of herons and egrets at our local lakes that are similar in size and shape to cranes and can cause confusion for inexperienced birders.

The most common and largest heron species in Prescott is the great blue heron — it is 46 inches long and has a 72-inch wingspan! They are common at all of the lakes in the Prescott area, and are here year-round. Due to their size and coloration, many people mistakenly refer to them as a crane.

Probably the second-most common wading bird species in Prescott is the great egret. It is 39 inches long and has a 51-inch wingspan. With its pure white plumage it is easy to see, as it really stands out — no pun intended.

Less common heron and egret species occur from time to time at our local lakes, including snowy egret, cattle egret (not very often), black-crowned night-heron and green heron. Each of these species is much smaller than the great blue heron and great egret.

Herons and egrets do not eat aquatic plants or grains. Rather, they could be considered a bird of prey in the sense that they eat live food. Their diet is expansive, including gophers, mice, snakes, crawdads, fish, frogs, lizards — basically anything they can catch and swallow whole! They are fairly solitary, usually hunting by themselves, and they typically fly singularly, not in flocks.

There are only two crane species in North America — whooping crane and sandhill crane. Cranes, as David Sibley writes in “The Sibley Guide to Birds,” are “gregarious, noisy, and conspicuous, often in large flocks.” Sandhill cranes are 46 inches long with a 77-inch wingspan. During breeding season they eat live food, but in winter their primary diet is a variety of grains and corn.

Due to their preference for grains and corn, sandhill cranes usually winter in an area where there are sloughs and shallow lakes that are situated near agricultural settings. They roost at night in the water to avoid predation by foxes, coyotes and bobcats, and they forage during the day in fallow fields.

While the lakes in Prescott are a good nighttime habitat for cranes, we don’t have agricultural fields in close proximity where they can forage during the day. I suppose this is a reason we don’t (normally) get cranes here.

However, this past Friday —New Year’s Day — four sandhill cranes were reported at Willow Lake, which was a really big deal. I hustled out there and spent over an hour looking for them. I found scores of ducks, a few gulls, three different species of geese (Canada, greater white-fronted and snow), cormorants, herons, egrets and a couple of porcupines (no kidding!) but no cranes.

Until 4:57 p.m., when I witnessed four sandhill cranes flying from the west into the Willow Lake area. It was exhilarating! I literally just happened to be standing in the perfect spot at the exact right moment to see them for all of five to seven seconds until they disappeared out of view. On Saturday I went back to Willow Lake and got some pictures of them — what a thrill, and a great way to start my 2021 bird list for Arizona!