Birding: It’s a sure sign of spring — turkey vultures are back! 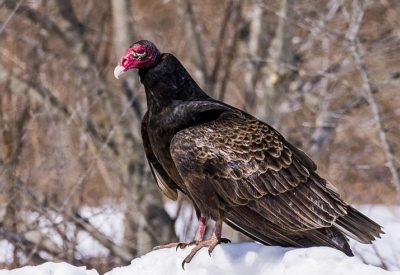 The spotting of turkey vultures is a sure sign that spring is just around the corner. (Courier stock photo)

Interestingly, our store is situated between two cemeteries. Directly behind the back of our store is the Arizona Pioneers’ Home Cemetery, and across the street from us is the Mountain View Cemetery. The variety of birds we’ve seen from our parking lot has been enhanced by the habitat each of these cemeteries provide.

Over the years, the diversity of species we have observed at our store is quite impressive. This indicates that even small areas, with good habitat, can support a variety of birds — even when that habitat is surrounded by a high-traffic urban area.

One morning, as I pulled into the parking lot, I saw a peregrine falcon eating its breakfast as it perched on the edge of the Bank of America building. At different times of the year we see Swainson’s hawks, zone-tailed hawks and red-tailed hawks. We see ravens every day, and usually Say’s phoebes, house finches and pigeons. Occasionally we see great-tailed grackles.

The cemetery behind the store has fewer trees, so it lends itself to a variety of birds that prefer a more open habitat. From the back of the store I have seen American kestrels (the smallest species of falcon in North America), western and Cassin’s kingbirds, meadowlarks, lark sparrows, American pipits, rock wren and, in winter, small flocks of western bluebirds.

Here is an update on the great horned owls nesting in our yard. Earlier this week, as I was walking out to get the mail, I glanced over at my bird-feeding area and noticed a small group of mourning doves sitting in the tray feeder. Without any warning, the male great horned owl flew in and landed directly on the edge of the feeder as all of the mourning doves burst into flight.

I’m not quite sure if the owl was attempting to catch a dove. It doesn’t seem to be a likely scenario, as if that was his intention, he failed. The owls don’t seem to be fazed by our activity as we move around the yard. It is nice that they are so trusting.

The hobby of bird feeding has its potential down-sides — one being the possibility of attracting animals other than birds that like to eat seeds. Interestingly, most mammals are seed eaters, including bear, fox, coyote, javelina, raccoons, skunks, packrats and mice, to name a few.

If the prospect of attracting critters other than birds deters you from feeding the birds, you might think of it in a different way. I’m convinced that one of the reasons the owls are nesting in my yard is that there is sufficient prey in the area to support them and their future brood.

It is hard to know how many chicks they will have, but let’s just say they have three babies. Can you imagine how many mice and other rodents it will take every single day to feed a family of five owls? I’m looking forward to the owls “cleaning up” the neighborhood over the next few months. Knowing that I have owls living in my yard makes me feel pretty confident that I won’t have a rodent problem, even with all of the bird feeding I am doing.

Eric Moore is the owner of Jay’s Bird Barn, with two locations in northern Arizona — Prescott and Flagstaff. Eric has been an avid birder for more than 50 years. If you have questions about wild birds that you would like discussed in future articles, email him at eric@jaysbirdbarn.com.