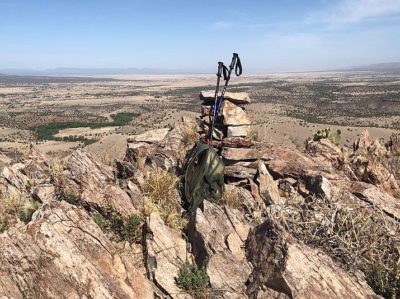 Two weeks ago, I spent four days along the Verde River, where it runs through Dead Horse Ranch State Park in Cottonwood. This section of the Verde is sometimes referred to as the ‘middle’ Verde.

The day after I got home, I spent the next two days in and around the ‘upper’ Verde. This area is referred to as the headwaters of the Verde River. This section is also the confluence of Granite Creek and the Verde River.

Parallel to State Highway 89 in Paulden is Old Highway 89. On the west of Old Highway 89 is an area known as Sullivan Lake. It was created back in the 1930s by the Work Projects Administration and creates a small reservoir when there is sufficient water flowing in the Big Chino Wash. While this small reservoir frequently has water in it, this year it is bone dry.

On the east side of Old Highway 89, a gorge opens up, seemingly out of nowhere. It is a fascinating transition from grassland to rugged, volcanic canyon walls. In this gorge water flows out of the ground, creating the Verde River.

As I hiked and explored this area, I saw many bird species I did not observe in the middle Verde. For example, within minutes of arriving in this high-desert grassland area, I saw loggerhead shrike, violet-green swallow, horned lark and rock wrens, species I did not see at Dead Horse Ranch.

As I continued to explore this area, I saw more species missed earlier in the middle Verde. For example, I saw golden eagle, wild turkey, northern mockingbird, plumbeous and warbling vireo, and black-headed grosbeak. The take-away from this experience is the importance of visiting different habitats to see different varieties of bird species.

One morning while exploring the upper Verde, I hiked to the top of Little Thumb Butte, a prominent rock formation that is

reminiscent of Thumb Butte in Prescott. It was a rugged, steep hike, but worth it.

Bird-migration activity is very lively now. We are being flooded with reports of orioles, grosbeaks, buntings, green-tailed towhees, and a variety of warbler species. This is an awesome time for bird watching, as you are likely to encounter the widest variety of bird species in your yard this time of year.

This is a result of three groups of bird species overlapping at the same time. This first group includes non-migratory, year-round resident birds, such as house finches, mourning dove and scrub jays. The second group includes transient species, just passing through, such as warblers and buntings. The third group includes summer residents, such as black-headed grosbeak and the three oriole species we see in the Prescott area—Bullock’s, hooded and Scott’s.

Over the last week I have seen flocks of chipping sparrows in my yard, but no white-crowned sparrows. I think they are gone for the balance of the summer. I haven’t been seeing my resident Lincoln’s sparrow anymore, either. However, I still have a good number of Cassin’s finches and pine siskins in my yard.

This past week, green-tailed towhees, lazuli buntings and brown-headed cowbirds started showing up in my yard. Each of these species is a ground-feeder and prefers an ingredient called white-proso millet. The best way to feed millet is by either broadcasting it directly down onto the ground or by putting it in a flat tray feeder.

For any other bird-feeding advice, so you can catch all of the spring migration action, stop by Jay’s Bird Barn.