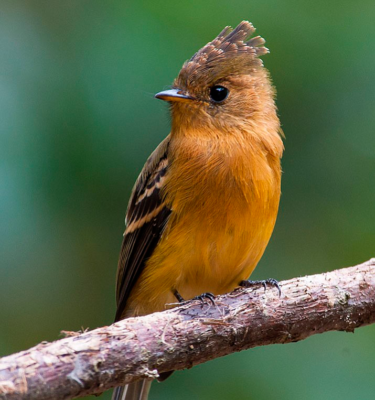 This past week, I spent four days in Sierra Vista attending the Southwest Wings Birding and Nature Festival. I loved being in southern Arizona — it was like coming home to me. It was fun to experience several very powerful monsoon storms. The landscape was so green that I had a hard time remembering I was in Arizona.

Each day, before and after the festival, I was able to spend time birding. Being a serious field birder, I got a tip on where to go to look for a particular species I had never before seen. One morning, I drove up Carr Canyon to the Reef Township Campground to look for a tufted flycatcher.

This species is so rare in the United States, that it is not even listed in the Sibley Guide to Birds of Western North America. Fortunately, the second edition of The Sibley Guide to Birds covers this species, mentioning it as a “very rare visitor from Mexico with a few records just north of the border in Texas, Arizona… mainly in fall and winter.”

Well, it turns out that a pair of tufted flycatchers built a nest and reared two young this summer adjacent to the campground. When I arrived there, I saw a gentleman wearing a pair of Swarovski binoculars — a pretty good indication that he was a serious birder, too. I figured he was looking for the same rare bird I was looking for. We struck up a conversation and decided to team up to find the flycatcher.

It didn’t take long. Within minutes, we successfully found one tufted flycatcher — a life bird for both of us! We stood for probably 30 minutes without moving and watched it as it perched for long periods of time between its forays to catch flying insects. For a flycatcher, it is a striking, colorful bird, unlike many of our flycatchers that are fairly dull and drab.

One of my birding outings was spent in the desert habitat around Sierra Vista. An interesting observation there was a mixed species pair of quail consisting of a male Gambel’s quail and a female scaled quail. It is not rare for bird species to inter-breed, but rarely do you get to see a mixed pair together.

One evening I drove down to the Coronado National Monument along the Mexican border and drove up Montezuma Canyon to Montezuma Pass. I had never been there before, and I really enjoyed the landscape, habitat and views. From this vantage point, I could see far into Mexico.

One of the reasons I chose to visit the National Monument is because this is the terminus (or the beginning, depending from which direct you start) for the Arizona Trail. The Arizona Trail goes from the Mexican border to the Utah border, and is over 800 miles long! I would love to hike the entire Arizona Trail someday.

The time of day did not lend itself to seeing a lot of birds, since it was just before sunset. However, I did see a lot of Coue’s deer, and I got a great look (and pictures) of a diamondback rattlesnake.