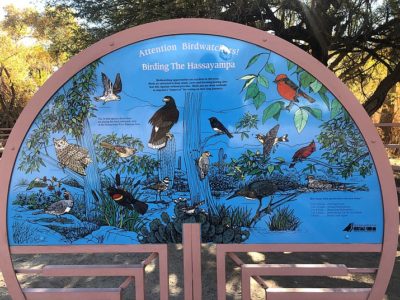 Signage about the birds at the rest stop on State Highway 60 just south of Wickenburg. (Eric Moore/Courtesy)

This year, more than ever, I have done a lot of traveling and bird watching within the state of Arizona. If you’ve been reading my column lately, you know that I have been pushing hard these last few weeks to finish up the year by documenting the observation of 300 species in the state. Last week, I was still at 299 species.

I am happy to report that the day after Christmas I topped 300 for the year, which was very exciting! I left Prescott early in the morning and made a big loop around the Bradshaw Mountains. My first stop was at Badger Springs off of the I-17, and my target bird was an American Tree Sparrow. About a week earlier, I had tried to find it, but struck out.

I spent about two hours at Badger Springs, and if it hadn’t been for the assistance of other birders, I don’t think I would have seen it. I have seen tree sparrows before, but never in Arizona, so not only was this a bird new for my 2020 list, but it was also new for my state list.

Leaving Badger Springs, I drove south on the I-17 to the Carefree Highway and headed west to Lake Pleasant. This was the third time I’d stopped at the lake over the last four weeks to look for a single Barrow’s goldeneye that had been reported on eBird.

I was excited to find a flock of common goldeneyes in Two Cow Cove. Knowing that the Barrow’s goldeneye was reported hanging out with common goldeneyes, I felt confident I would find it, and eventually I did. I also saw a horned grebe at the lake. Between the tree sparrow, the goldeneye and the grebe, I added three species to my year list — bringing me to 302 for the year.

After Lake Pleasant, I continued driving west on Highway 74 until it connected with Highway 60. A few miles south of Wickenburg, there is a lovely rest stop that backs up to the Hassayampa River Preserve. A little more than a week ago someone had seen a brown thrasher at this location, and I was hoping to see it. No luck.

The Arizona Game and Fish Department has some beautiful signage at this rest stop focusing on the plants and animals in the area. One of the signs posed the following question, “How many bird species have you seen today?” In the bottom right-hand corner of the sign there was the following chart:

• 1 to 4 birds…Better Brush Up on Your Birds

Needless-to-say, I got a kick out of the sign.

From there, I continued north on the 60 to the Hassayampa River Preserve where I spent more than an hour looking for another rare bird — a Tennessee warbler — which had been discovered just over a week ago. However, in spite of my best efforts, I was unsuccessful in finding it.

I came home from Wickenburg on Highway 89, through Congress, Yarnell, Peeples Valley, Skull Valley and on into Prescott. The ‘loop’ was just over 190 miles and took ten hours, which included all of my birding time, too.

As the year draws to a close, I feel so blessed that in spite of the coronavirus pandemic, our business has been preserved and protected. As a business owner, I am very grateful to all of our customers who have supported our family business in 2020. Wishing all of you a healthy, happy and prosperous New Year!