Birding: Head over to Lynx Lake to see Mandarin ducks 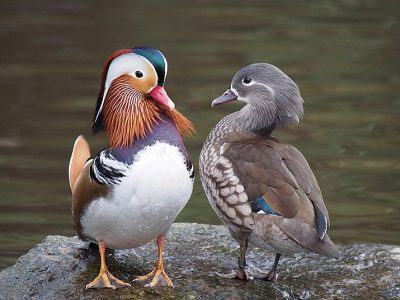 Up until a few months ago, if you were to ask me what the prettiest duck species is in the Prescott area, I would have answered “wood duck.”

Wood ducks are an absolutely beautiful bird species that naturally occurs here. They are non-migratory and breed in the riparian habitat associated with Granite Creek, from the Watson Woods Conservation area, north to the old highway 89A bridge over Granite Creek.

Move over wood ducks, there is a new kid in town.

Over the past several months I have received countless emails (and pictures) from customers sharing their delight in seeing a pair of male Mandarin ducks at Lynx Lake. You would be hard pressed to find a more beautiful bird than a Mandarin duck.

I frequently use the word “striking” to describe a particularly beautiful bird. However, when it comes to Mandarin duck, the word striking is simply inadequate. Maybe the word “stunning” is more appropriate.

This is a bird that looks as if it were created by a committee of creative individuals, each having input into the final design.

The combination of colors, patterns and feather structure is so unique and unlike anything that occurs naturally in our area.

What is really intriguing is trying to understand the “how.”

How did two male Mandarin ducks show up at Lynx Lake? This is a species that is not native to North America — its native range is defined as being in the east Palearctic region.  This area encompasses Russia, east of the Ural Mountains, Mongolia, China, Tibet, Korea and Japan.

Granted, a lot of bird species have been introduced into North America from all over the world.

Another beautiful bird species commonly found in many parts of North America is the ring-necked pheasant — also an import from China.

I am confident that these birds did not fly to Lynx Lake. That is not a reasonable or realistic assumption.

I am sure they were introduced into the Lynx Lake environment by someone who may have raised them from ducklings.

It is not an uncommon practice for domesticated ducks and geese to get “dumped” at our local lakes by individuals who for one reason or another no longer want to care for them. While dumping non-native species is illegal, it doesn’t stop the practice.

If you want to see the Mandarin ducks, it is an easy endeavor.

Simply drive to the south shore of Lynx Lake. Park near the boat ramp and walk east along the shoreline until you see them. It really is that simple.

On the day I went to see them, from the time I got out of my car until I laid eyes on them was less than two minutes! I would recommend taking binoculars so you can really experience the full variety of their shades and hues.

While there, be on the lookout for a unique hybrid. In the same general area, I saw a cross between a mallard and a gadwall.

The head was mostly green, typical of a male mallard, and it had the curled tail feathers that are distinctive in mallards.

However, the flanks and back looked like the plumage you would see on a typical gadwall.

As I reflect on the Thanksgiving holiday, I humbly acknowledge that I have so much for which to be grateful. I am grateful to live in this lovely community, and I am grateful for the love, friendship, and support of so many customers who support Jay’s Bird Barn, Hallmark, and Arizona Field Optics.

I wish each of you a lovely Thanksgiving Day.