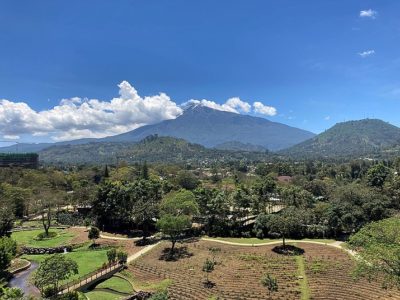 Our view of Mt Meru from the Gran Melia hotel in Arusha, Tanzania. (Eric Moore/Courtesy)

As crazy as it sounds (it is hard for even me to believe,) I am in Tanzania right now! Gayla and I flew here late last week to join Prescott resident, Walt Anderson, a naturalist, photographer, artist and former professor at Prescott College. We have only been here a few days, and, so far, it has been magical!

In 2009, I traveled to South Africa by myself when our son, Jeremy, was finishing up his two-year church mission. I enjoyed a birding safari in the Okavango Delta in Botswana prior to meeting up with Jeremy in Johannesburg, South Africa. At the conclusion of his mission, we spent time in three countries — Botswana, South Africa (where we visited Kruger National Park) and Lesotho.

After my first trip to Africa, I don’t know that I ever thought I would have the opportunity to return in the future. I am thrilled that we could make this trip, considering all of the concerns related to the coronavirus.

Our trip started last Friday, with a short flight to Salt Lake City before taking a nonstop flight to Amsterdam. I can now say I have been to Europe in spite of never leaving the airport! The final leg of our trip was a nonstop flight to Kilimanjaro Airport in Tanzania.

We stayed at the Gran Malia hotel in Arusha for the first two days to acclimate to the time change and prepare for our safari. The gardens and the birding at the hotel were amazing, and we enjoyed incredible views of Mount Meru. On a short birding excursion while in Arusha, we saw Mount Kilimanjaro in the distance — a truly spectacular sight.

The first time I visited Africa, I was not familiar with, nor was I using eBird, the online, database program hosted by the Cornell Lab of Ornithology where individuals can record their bird sightings. I still have my handwritten records from my first Africa trip, but I have not yet entered those observations into eBird. This time I will record all of my bird sightings into eBird, preserving a record of my experience here.

After leaving Arusha, our first stop was Tarangire National Park. While the birds have been fantastic, we’ve truly had a ‘National Geographic’ experience with outstanding wildlife viewing of giraffes, wildebeest, cape buffalo, elands, zebra, elephants, gazelle, impala, water bucks, monkeys and baboons — to name a few.

As you might imagine, my main focus is observing the many varieties of birds that are here. Several months ago, to prepare for this trip, I bought a field guide titled “Birds of East Africa.” In addition to covering Tanzania, the guide also covers Kenya, Uganda, Rwanda and Burundi. There are more than 1,400 species in the field guide.

Preparing for this trip has been challenging, as there were so many birds to study! In the past, when I’ve done other international trips, I typically repetitiously study the bird book for several months, and literally memorize the names of every bird species found in that country. I guarantee, this was not the case for this trip.

Studying the birds of East Africa has been like learning a new language, with families of birds with which I have no familiarity, such as honeyguides, pytilia, boubous, apalis, eremomela, turacos, tinkerbirds, nicators, crombecs, cisticolas, batises, babblers, bushshrikes, drongos and so many more!

The learning curve is steep, so it is great to be here with Walt, who has been coming to Africa since 1979. His former student, Augustine Mwangotya, is a local guide, and we have certainly benefitted from his expertise. In the first two days, I have already seen over 100 different bird species, and know that I will see hundreds more over the course of the safari.