Birding: Granite Basin is hopping with birds and … goats? 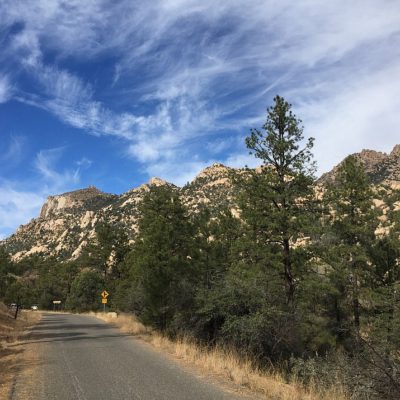 A view of Granite Mountain from Granite Basin. (Eric Moore/Courtesy)

Over the last few weeks, I’ve gone bird watching at Granite Basin a couple of times. The level of bird activity has been off the charts, particularly in the area west of the lake.  What has fascinated me was not just the quantity of birds but the variety of birds observed.

Some of the birds I saw were downright unusual for that location at this time. For example, on Thursday the 10th, I saw a pair of Scott’s orioles. This was a big surprise. In all of the years I have birded at Granite Basin, I have never seen this species at this location. It is especially interesting, as it was such a late sighting.  Throughout most of the Arizona Central Highlands, our three oriole species (Scotts, Bullock’s and hooded) are gone by the first part of August, so this pair was about a month later than normal.

Another exciting find was seeing a male hooded warbler. There have been at least two male hooded warblers in Granite Basin all summer, which is extremely rare.  I saw four other warbler species as well — painted redstart, common yellowthroat, Wilson’s and orange-crowned.

One overall observation is the presence of what would be considered ‘high-elevation’ species already down in the basin in early September.  This strikes me as being interesting.  For example, there were good numbers of both Steller’s jays and red-breasted nuthatches, which seems unusual for this time of year. My assumption is that they are hanging out in the basin because the lake is providing a source of water for them, which probably is not currently available at higher elevations due to our poor monsoon season.

Interestingly, the birds that have been absent at Granite Basin Lake are water birds. Normally it would not be unusual to see a great blue heron, or a double-crested cormorant, or American coots or any number of duck species.  I have not seen a single water bird at the lake this month, which seems very odd.

Speaking of odd, this past week I had a very interesting sighting — something I have never encountered at this location before. I was on the southeast shoreline when I noticed what looked like two loose dogs on the opposite side of the lake. One was fairly large and was black and white, and the other one was smaller and more gray in color. Using my binoculars, I discovered they weren’t dogs at all.  They were goats!

I’ve also done some birding on the west side of Willow Lake where there are wild sunflower plants covering the weedy fields.  A conservative estimate is that there are hundreds and hundreds of lesser goldfinches taking advantage of the sunflower blossoms going to seed. I’ve noticed that thistle/nyjer seed sales at the store are spiking right now. I’m actually filling my finch feeder every day.

As a reminder, the month of September is the submission period for our 12th annual Wild Bird Photography Contest. If you have questions, come by the store to pick up a flyer, or go online at www.jaysbirdbarn.com, for more information. Time is getting short — the deadline to submit pictures is Sept.30.