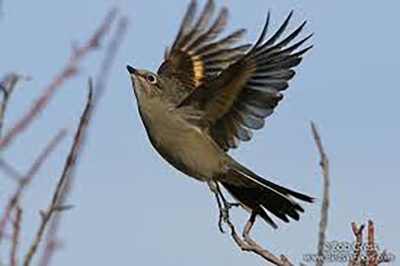 This past week I led a Jay’s Bird Barn-sponsored bird walk to Goldwater Lake. As we assembled in the lake parking lot, it was very quiet in the forest, and I was concerned that we might not see very many birds. Well, I didn’t need to worry. As the morning progressed, we continued to add more and more species to our list for the day.

At one point, as we were hiking around the northeast end of the lake, I happened to glance back towards the middle of the lake and saw a black and white bird bobbing on the water, several hundred yards away. My immediate thought was that it was a gull. I announced to the group that there was a gull on the lake and that we needed to head back to where we had just come from, as I wanted to identify it.

We hurriedly went back. By the time we got to a vantage point where we could see the gull, I was embarrassed to discover that what I had thought was a gull was really a domesticated, barnyard duck! The joke was certainly on me, especially as the leader! Oh well.

However, going back turned out to be a great boon. From where we were standing, we were treated with at least nine different bird species all in the same tree! We saw white-breasted nuthatch, bridled titmouse, house finch, lesser goldfinch, yellow-rumped warbler, chipping sparrow, dark-eyed junco, western bluebirds, and the best find—two Townsend’s solitaire. How often do you see nine different species in the same tree?

Solitaires are typically a fairly secretive bird, but we had no problem seeing them. In fact, they put on a great show for us. Several times they flew from one tree to another and back again, allowing us to see the distinctive markings in their wing feathers, which are visible in flight.

The solitaires and the bluebirds were taking advantage of the mistletoe berries—a reminder of how important mistletoe is to wild birds. We also looked at two ponderosa pine trees that are being used as a granary by a clan of acorn woodpeckers. We could see where they had stored thousands and thousands of acorns in the bark of the trees. We also saw red crossbills in flight more than once.

After we returned to the store and tallied our bird list for the day, I was pleased with the diversity of bird species seen. At the same time, however, I was shocked by what we hadn’t seen.

We were in a beautiful forested habitat for the space of three hours, and in that time we never saw or heard a single jay. We should have seen Woodhouse’s scrub-jays, and possibly Steller’s jays, but we didn’t see any. We also didn’t see a single spotted towhee. Birding is a funny thing. If you had told me that morning that we would see red crossbills and solitaires but no jays or towhees, I would not have believed it.

I invite you to participate in our free weekly bird walks. Please call the store at 928-443-5900 for details.

The Wild Bird Photo Contest exhibit is open to the public from 8:30 a.m. to 5:30 p.m. every day, except Sundays. I invite you to come and vote for your favorite pictures during the month of October during our Fall Seed Sale event.