Birding: From a concrete jungle to the real jungle 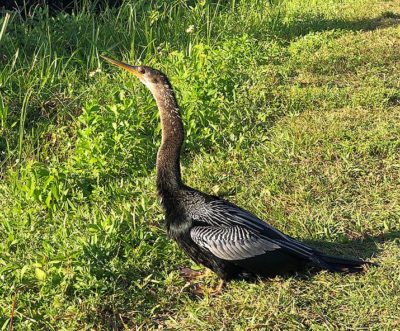 An Anhinga is seen in the Everglades National Park. (Eric Moore/Courtesy)

I had a very full week this past week.  I started my week (Monday) in Prescott.  On Tuesday I flew to Atlanta, Georgia to attend the America’s Mart trade show that I go to each year.  When I left the trade show Friday night, I flew to Miami, and on Monday of this week I flew out of Miami to Trinidad.  Whew!

It was two years ago this month that Gayla and I did our last out of country trip—when we went birding in Costa Rica.  I have been planning for and anticipating this trip for 10 months now, and I am so excited to finally be here.

The contrast of being in downtown Atlanta last week to Trinidad this week is pretty extreme.  I feel like I went from being in a concrete jungle to being in a real, live jungle!

My hotel in Atlanta was about a mile and half from the trade show in the downtown district.  Each day I walked there and back amidst towering sky scrapers and busy city streets with virtually no trees or landscaping.  In that downtown setting I only saw two birds—one robin, and one cardinal.

However, just over a mile north of the downtown area is a wonderful place to go birding — Piedmont Park.  One afternoon, after I finished up at the trade show, I went to the park and saw over thirty species including several ‘eastern’ varieties that we don’t see in Prescott such as brown-headed nuthatch, Carolina wren, eastern phoebe, eastern towhee and pine warblers.

When I left Atlanta, I flew to Miami where I spent the weekend waiting for my flight to Trinidad.  On Saturday I spent 10 hours birding as I visited many different habitats and worked to see as many different bird species as I could.  Southern Florida is probably most famous for the number and variety of wading birds such as great blue heron, little blue heron, black-crowned night heron, green heron, great egret, snowy egret, white ibis, glossy ibis, wood stork and limpkin — and I saw them all!

I spent about five hours in Everglades National Park.  I set out on foot, and walked several miles into the park and just enjoyed the solitude and the stillness of it.  It was so quiet, which is something I don’t experience very often in my life.  I really tried to just enjoy being in that moment, enjoying the beauty of the park, the sun, the clouds, the temperature—all of the sensory experiences of being in nature.

The week ahead should be very exciting for our group of birders.  Our group is made up of 12 individuals — 10 from Prescott and two from Farmington, New Mexico.  Our itinerary includes a one-day trip extension to go see an endemic species called the Trinidad piping-guan.  I hope we see it!

Our trip extension precedes the 10-day ‘classic’ Trinidad and Tobago birding trip.  We will spend five nights at the Asa Wright Nature Center here in Trinidad and do day trips out and back from the lodge each day.  After that we will be flying over to Tobago for four nights to continue birding.

For the last several months, I have been doing a lot of hiking in the Prescott area to prepare for this trip. Interestingly, last week between my travel days, time at the show and my time in Miami, I have walked over 58 miles in the last six days.  One day, while in Atlanta, I walked over 17 miles!  Needless to say, I’m looking forward to my birding vacation.