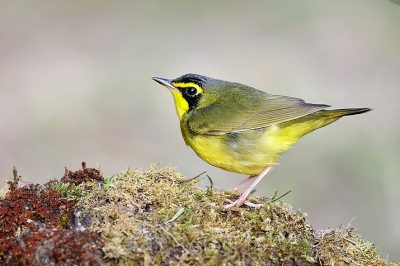 Growing up as a young birder in Tucson, I remember being included in a calling tree when a rare bird showed up in the area. The person who discovered the rare bird would call and report their sighting to the individual in charge of the calling tree. That person, as quickly as possible, would start the calling tree by calling five people who would in turn call five people, etc. until everyone was contacted.

This past week I received an email from eBird reporting a Kentucky warbler that had been observed along Granite Creek where it parallels White Spar Road near Haisley Homestead. Wow, this was a really good find, truly a rare bird for this area, as you might surmise by its name! The bird was discovered on Wednesday but I didn’t get the email notification until Thursday.

My initial thought was that the bird was probably already long gone, but then I started getting reports that people from all around the state had come up to see the bird and it was still here. When I got off work that afternoon I headed over to see if I could find it. There weren’t any other birders there when I arrived, so I started scouring the area, not really knowing where to look for it.

After looking for probably close to an hour I came up empty-handed. But then, in the distance, I could see a birder who’d arrived after I’d gotten there. I also could see that the birder had a large camera and was pointing it upwards — this was my clue that he was probably “on the bird.” Since he was a distance from me, I yelled “Do you have the bird?” His reply was “Yes.”

I hustled over to where he was and he pointed out the bird — it was perched at eye-level, probably only 20 feet away. The bird seemed very relaxed and comfortable — it was preening, and after a while it started singing and it continued to sing for several minutes. He really put on a show. Wow, this was amazing. This was a bird species I had never seen before in my entire life. It was a big deal, to see a new, live bird — a bird that shouldn’t be in Arizona, and it was right here in Prescott.

It fascinates me how a bird can get so far off course! This is a species that summers east of the Great Plains and winters in southern Mexico and in the Yucatan peninsula. What it is doing in Arizona is anyone’s guess — it is obviously way off course.

At home I’ve been stressing out over my quail families as I hadn’t seen either family for over a week. Then, on Tuesday of this week, I saw the single dad with 13 babies! The babies are growing fast — they’ve probably already more than doubled in size. I was relieved and glad to see all of them.

Eric Moore is the owner of Jay’s Bird Barn in Prescott. He has been an avid birder for over 50 years. If you have questions about wild birds that you would like discussed in future articles, email him at eric@jaysbirdbarn.com.