Birding: Even a slow day of birding can result in a few surprises 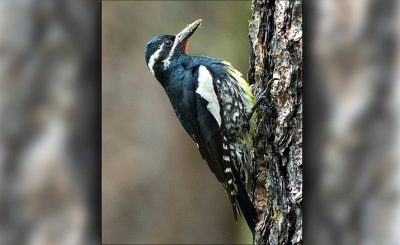 This past week I led a Jay’s Bird Barn sponsored bird walk to Mingus Mountain. Our planned itinerary was to bird an area known as Butterfly Springs. However, when I arrived at our meeting place, I was informed that the area where we would normally park had been washed out.

Being an optimist, I was confident we’d be able to find a place to park our cars, so we headed up the mountain. Wow, did I underestimate the extent of the flooding! It was obvious that Mingus Mountain had experienced substantial monsoon rains, heavily damaging the drainage areas on the sides of the road.

We had to park further away, and we walked down to the area where we’d normally hike up and over a small man-made dam to access the trail that goes towards Butterfly Springs. Water was pouring out of the dam, and so I left the group down below while I went and did some reconnaissance.

Scrambling up the rocky hillside and over the dam, I could see that the normally dry trail was under water. There was no way we’d be birding Butterfly Springs that day. We quickly made the decision to continue up the road to Mingus Lake.

When we arrived there, the small stream that feeds the lake was flooding the meadow—it too was impassable. At this point it was clear that the only place where we could walk was on the dirt road, so that is what we did.

It is not my preferred style of birding, but it was the only dry option. We walked from the lake out to the lookout on the east ridge of Mingus and back. What started out to be a slow day turned into a decent birding day.

There weren’t a ton of birds, and we didn’t rack up a large species list, but we had good birds. One of my personal highlights was seeing an adult Bald Eagle. That is a sight of which I never tire. We also had a red-tailed hawk and a zone-tailed hawk, along with several turkey vultures. It was a definite sign that fall migration is underway and many of the “soaring” birds were on their way south.

Some of the more common species for the day were western bluebirds, in a variety of plumages. We had adult males and females, and we also had several juveniles with varying plumages. We also saw both pygmy and white-breasted nuthatches and mountain chickadees.

The meadows were filled with wildflowers, much to the delight of the rufous and broad-tailed hummingbirds. Of course, the profusion of flowers did not prevent them from fighting! I think if the number of wildflowers were doubled or tripled, they still would have chased each other all morning long!

As usual, it is often the birds that we don’t see that really stick out in my mind. We were in this incredible forested habitat with both ponderosa pines and fir trees, with water everywhere, and we didn’t see a single violet-green swallow, an American robin, or a spotted towhee. It was if the birds were playing hide-and-seek with us. And they were sure hiding well!

However, we did have an amazing sighting—a male Williamson’s Sapsucker. I don’t think I’ve ever seen this species in the Arizona Central Highlands in summer, only in the dead of winter. When I entered this species into eBird, it came up as “rare” and required additional documentation.

Even on a slow birding day, you never know what you might see.