Birding in the desert brings back many fond memories 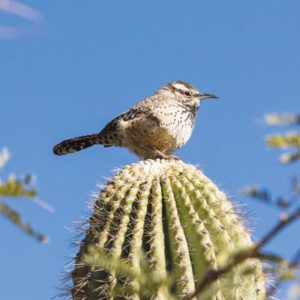 Last week our family spent a few days down in the Valley of the Sun during spring break, which provided me with an opportunity to do some birding. I spent time at Gilbert Water Ranch, Tempe Town Lake, the Phoenix Zoo and at the McDowell Sonoran Preserve.

I love spending time in the desert – it reminds me of my time as a youth tromping through the desert in Tucson. I never tire of hearing and seeing common desert birds such as cactus wren, curve-billed thrasher, verdin and gilded flickers.

As usual, Gilbert Water Ranch was very birdy. I spent several hours there and saw 57 different species. I was somewhat surprised by the number of winter visitors still present at this elevation. There were ruby-crowned kinglets, yellow-rumped warblers and plenty of white-crowned sparrows. I was particularly pleased to find a single white-throated sparrow and a lone hermit thrush.

While birding at the water ranch, I added four species to my 2014 state list – Wilson’s snipe, greater yellowlegs, black-chinned hummingbird and cliff swallow. The cliff swallows were busily gathering mud and building their nests on the underside of a box culvert adjacent to the preserve.

I was thinking I might see a good variety of spring arrivals such as white-winged dove, yellow warbler, Lucy’s warblers and maybe even some orioles, but I didn’t see any of these species. In spite of our mild winter and spring-like weather, apparently these birds have not yet shown up. It is just a matter of time, though, and all of these different species will be arriving.

Tempe Town Lake provided a good variety of birds including grebes, ducks, herons – and a brown pelican! I was really happy to find and get great looks at the pelican with my spotting scope. Having a scope for long distances is so much more effective than a pair of binoculars, and I was really glad I had it with me.

I also saw two different kinds of cormorants: double-crested and a neo-tropic, which was a new species for my state list. Again, I was hoping to see some “transient” spring migrants such as terns and gulls that pass through Arizona on their way north in the spring, but I didn’t see any.

Birding at the zoo resulted in additional species for my state list. Before I had even crossed over the bridge at the entrance of the zoo, I saw two species that I hadn’t yet seen this year. On one side of the bridge there were some redheads (a type of duck) and on the other side I saw a common gallinule, a close relative to the American coot.

When you think about it, zoos are a great place to go bird watching because of the abundance of water, vegetation and all of the grains that are used to feed the animals. I enjoyed all of the different birds I saw – both those on display in exhibits, and those that were wild and free.

This was my first visit to the McDowell Sonoran Preserve, and I enjoyed the beautiful Sonoran Desert habitat found there. I added four species to my state list, including ash-throated flycatcher, black-throated sparrow, gilded flicker and costa’s hummingbird.

My state bird list now stands at 153 species for the year. I anticipate that this number will increase dramatically over the next month or so as many of our spring birds begin to filter into the area. I am looking forward to seeing black-headed grosbeaks, lazuli buntings and other migrants as they arrive.