Birding: Competition for birdseed — squirrels in the Prescott area 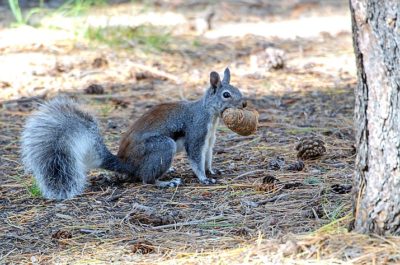 Earlier this week, I was both surprised and thrilled to see an Abert’s squirrel sitting in my platform bird feeding tray, getting its fill of bird seed. In the 16 years we’ve lived at this house, I have never seen an Abert’s squirrel in my yard! This is a species that is typically found at higher elevations, in a ponderosa pine forest.

Granted, I do have a ponderosa pine tree in my yard, but I am not even remotely close to a forest. In the Prescott area — unlike in many parts of the country — squirrels are pretty much a non-issue for folks who feed wild birds in their yard. It is a rare day when we have a customer in the store who is trying to discourage squirrels from raiding his feeders.

There are three primary squirrel species in the Prescott area — rock, Arizona gray and Abert’s. Here is a little information about each species.

Rock squirrels have a two-toned appearance. From the head to mid-body, they are mottled gray; and from their mid-section to the tip of their tail, they are mostly brown. This is the most common of the three squirrels found in this area, and they occur in a wide variety of habitats. They are primarily ground-dwelling squirrels. They are capable of climbing trees and scrubs, which they do from time to time, using the vantage point as a lookout.

Because rock squirrels are ground-dwelling, they are frequently observed around such manmade structures as storage sheds and outbuildings, where they tunnel under the structures to create their burrows. They also have a preference for rock piles, wood piles and other manmade piles such as bricks, old pallets, etc.

If you are trying to discourage rock squirrels from your yard, the best piece of advice I have is to remove places of harborage. If you eliminate rock and wood piles from your yard, chances are the squirrels will go somewhere else.

Arizona gray squirrels are found at higher elevations, generally between 5,000 and 7,000 feet. At first glance, they look similar to rock squirrels, but they have this giant bushy tail that helps to identify them. They frequently hold the tail up over their back, unlike rock squirrels where the tail is dragged behind them. They are not nearly as common in urban and residential settings, unless your home is situated in the forest.

Abert’s squirrels occur at higher elevations in a coniferous forest habitat. In winter, they grow long tufts of hair on their ears giving them the nick name of ‘tassel-eared squirrel.’ They spend most of their time in the canopy of the forest, moving from tree to tree using branches to get from one place to another.

In addition to squirrels, we have several chipmunk species in our area, the most common being the cliff chipmunk. In the Prescott area, their preferred habitat are areas with granite boulders where they scramble quickly over open rocky areas into cracks and crevices — out of sight and out of reach of predators.

In addition to squirrels and chipmunks, we have ‘pack rats.’ Their real name is the white-throated woodrat. These are primarily nocturnal mammals and they create large nests, called middens. White-throated woodrats are notorious for doing damage to the wiring in automobiles, RV’s and hot tubs. The best way to discourage pack rats is to remove places of harborage —wood piles, bricks, etc.

On another subject — between now and the end of the year, we have an art exhibit by local artist, Diane Iverson. I invite you to come see the exhibit, and perhaps make a purchase!