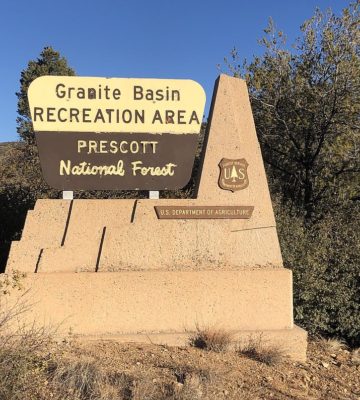 Granite Basin Lake and the surrounding area contribute to the variety of birds in the area. (Eric Moore/Courtesy)

In last week’s column, I wrote about all of the preparations leading up to my participation in the Prescott Audubon Society’s annual Christmas Bird Count.  Today I will share how my day went.

I started the count at sunrise, approximately 7:30 a.m.  The first area I covered was in the pinyon/juniper/chaparral habitat from Iron Springs Road up to the saddle on Granite Basin Road.  At 7:50, I spotted a Merlin—an uncommon winter visitor to our area.

I got my scope on it and was quite pleased with my find.  I felt finding such an uncommon bird so early in the day was a good harbinger of a great birding day.  In reality, my day didn’t live up to those expectations.

Species observed in this area were typical of the habitat I was in—scrub jays, western blue birds, spotted towhees, Gambel’s quail, juniper titmice, bushtits and crissal thrashers, to name a few.

The next area I covered was from the saddle down to the Day Use Area.  I observed 12 different species—mostly the same varieties observed in the first area.  However, there just weren’t a lot of birds.  I saw one bridled titmouse, one hermit thrush and only three dark-eyed juncos.  In a ‘normal’ year, I would have seen 30 to 40 juncos in this area.

The rest of my day was spent down in the ‘basin’, from the Day Use Area down to Granite Basin Lake and the surrounding area.

The lake contributes to the variety of birds I see in my assigned area.  Historically, I see double-crested cormorants, American coots, mallards and pied-billed grebes at the lake. This year, not one of those species was present.  However, I did see two species of water fowl that I have never seen at this location—buffleheads and goldeneyes.

The basin, heavily forested with ponderosa pines, is usually where I see the biggest variety of bird species typically found in a high elevation montane forest. Over the many years I have conducted the Christmas Bird Count at Granite Basin, I have seen Williamson’s sapsuckers, Steller’s jays, red-breasted nuthatches, golden-crowned kinglets, brown creepers, evening grosbeaks, red crossbills, Townsend’s solitaire, American robins, Pacific wrens, yellow-rumped warblers and fox sparrows.  This year I did not see a single one of these birds—not one!

When I wrote last week about ‘birdwork’, I meant it.  I was working hard just to find a bird, any bird.  Typically, I see the more common bird species such as Bewick’s wrens, chipping sparrows or even a phainopepla. This year?  Not one of them.

I don’t want to say I was discouraged, but it was a weird day.  How can you spend ten hours birding in Granite Basin and not see a single robin?  Or a chipping sparrow?

After birding for almost seven hours, I finally saw my first red-napped sapsucker of the day.  At 4:45 p.m., less than an hour before calling it quits for the day, I saw my first mountain chickadee of the day. How was it possible that I had not seen a single chickadee all day up until then?

The lack of birds certainly raises a lot of questions.  Where were all of the varieties of birds, and the number of birds that I ‘normally’ see in this area? It was not because of any lack of effort on my part — it was just the fact that they were not there to be seen.

This year’s count will certainly go down as one of the more difficult and least productive counts I have ever experienced.