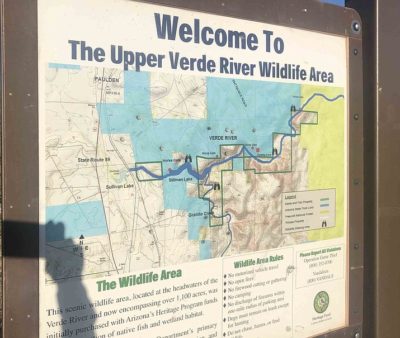 The Upper Verde River Wildlife Area has a variety of birds. (Eric Moore/Courtesy)

This past Saturday, I did some birding along a stretch of the Upper Verde River. I had two ‘target’ birds on this particular outing — golden eagle and yellow-billed cuckoo. Both of these species were on my wish list when I visited southeastern Arizona a few weeks ago, and I didn’t see either of them on that trip.

I was of the opinion that seeing these two species was kind of a shoe-in at the Upper Verde River location—but alas, no luck, again.

However, I did add one species to my 2020 state list!  I saw a male indigo bunting, which was a pleasant surprise. This species was also on my southeast Arizona trip wish list. I missed it there, so I was happy to see it on this trip. I wouldn’t say they are rare here; perhaps uncommon would be more accurate. Indigo buntings are far more common in the eastern half of the United States.

While it was disappointing to not see my target birds, I did end up with 37 species over the course of a couple of hours. And, I have to admit, I saw some really pretty birds, such as vermilion flycatcher, Bullock’s oriole, blue grosbeak, yellow-breasted chat, summer tanager and yellow warblers. I really can’t complain about what I didn’t see when I saw so many beautiful birds!

I saw a number of flycatcher species, including both Say’s and black phoebe, western kingbird, vermilion flycatcher, western wood pewee and ash-throated flycatcher. I also saw a lot of phainopeplas. While we often associate phainopeplas as being berry-eaters (and they are,) it is important to remember that they are in a family of birds referred to as ‘silky flycatchers.’ The phainopeplas were busy flycatching over the river as they flew through huge swarms of midges.

One of the things that strikes me as being interesting at this location is the confluence of lower elevation desert birds co-mingling with higher elevation birds.  For example, I saw both white-winged doves and black-throated sparrows. In my opinion, these birds are more likely to be observed in a Sonoran Desert habitat and elevation — and yet they were there.

In contrast, there were high-elevation birds present, such as violet-green swallows, plumbeous vireo and western wood pewee.  And of course, there were a lot of riparian obligates — bird species that are usually only found in a riparian habitat, such as song sparrows, common yellowthroats, black phoebes and summer tanagers.

The advantage of birding in an area where several different habitats come together is the opportunity to find a wider variety of birds. For example, birds observed in the riparian habitat would not be found in the adjacent desert scrub. Bird species normally observed at a higher elevation in the month of June, such as the vireo and pewee, wouldn’t normally be found at this lower elevation.

However, the variety of native plants made it possible for them to be there. Some of the more dominant plant species near the river include Freemont cottonwoods, desert hackberry, Arizona Walnut and several species of willows. The bottom line is this — where there is water (and vegetation), there are birds!