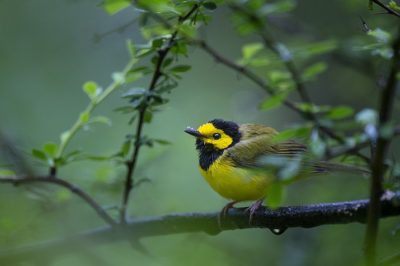 This past Friday, June 5, I saw a rare bird (for this part of the United States)—a hooded warbler. The typical summer range for this species is mostly east of the Mississippi, so to have one in the Prescott area is indeed rare.

A local birder found the warbler last week in Granite Basin and reported his discovery. A friend and I went out at 6 a.m. last Friday, and it took us probably less than 10 minutes to locate it.

Adding the hooded warbler to my “year list” brings me to 238 species in the state of Arizona so far this year.

My total year list, which includes birding in Arizona, Georgia, Florida, and my trip to Trinidad and Tobago now stands at 442 species for the year.

However, as the year progresses, it becomes increasingly more difficult to add species to my list. The year is almost half over, and there is no chance that I could see another 238 species in Arizona during the second half of the year.

Timing has a lot to do with bird finding. For example, during spring migration, there were a lot of “target” birds I was hoping to see. I knew that if I did not see them as they were passing through this region on their way north, it was not likely that I would see them later in the year.

In April and May, I was specifically looking for three warbler species — hermit, Nashville, and MacGillivray’s. Unfortunately, I didn’t see any of them during spring migration. Thus, it will be more challenging to find them during the second half of the year.

Before heading down to southeastern Arizona for the Memorial Day weekend, I hand-wrote a list of target birds that I wanted to see there. I knew that if I didn’t see them there, it was very unlikely I would see them the rest of the year, as most of the birds on my list are not found in the Prescott area.

Arizona has a lot of unusual bird species where the northern-most extension of their range just barely reaches into southern Arizona. These species are found predominantly south of the border.

Of the 42 target birds I was hoping to see, I saw 27 of them. I also saw two species that weren’t on my list — a crested caracara and blue-gray gnatcatchers. That is part of the joy of birding — you never know what you might see!

Some of the specialty birds I saw on that trip include varied bunting, bronzed cowbird, yellow-eyed junco, eastern bluebird, Arizona woodpecker, buff-breasted flycatcher and Botteri’s sparrow, to name a few.

I tried to find a pair of rose-throated becards. I located their nest along the Santa Cruz River (near Tubac) but I didn’t find the birds. That is just the way birding goes — sometimes you get lucky, and other times it can be painfully frustrating when you can’t find a rare bird that you know should be in a specific location.

If I were to just bird in the Prescott area the rest of the year, I would be limited to the varieties of birds that occur in this area. This is why it is important to travel to different parts of the state to pursue species that don’t occur here. And now that the year is nearly half over, I will have to do more ‘chasing’ — going after rare birds that have been discovered, such as the hooded warbler, to add to my state list.