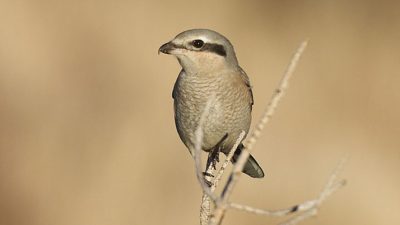 On Saturday, November 16th, my wife and I hiked a portion of segment eight of the Prescott Circle Trail.  This segment traverses across the old Prescott dump which is now a large, fairly flat area covered with weeds.  As we were hiking down the south slope of the cap, covering the old dump, I noticed a bird perched high in a dead tree.  The lighting could not have been better—it was about 8:15 in the morning, and the sun was directly behind me.

Before raising my binoculars, I assumed it was probably just a scrub-jay.  However, as I focused my binoculars on the bird, I could see that it was a shrike—but not the species of shrike that is normally found here.  I had the distinct impression that this bird was somehow different.

I hiked closer to close the gap between me and the bird.  I was using my 12×50 Swarovski binoculars—about the highest magnification you can hand-hold comfortably without too much vibration.  I had what I would consider the best pair of binoculars I could possibly be using to identify the bird.

Upon closer inspection, I felt confident that it was not a loggerhead shrike, but rather a northern shrike.  I didn’t have my Birds of Prescott, Arizona checklist on me, but I couldn’t help but wonder if this species had ever been seen in Prescott before.  I used the iBird Pro app on my phone to look at photographs of both loggerhead and northern shrikes to see the subtle differences between the two species.

After consulting the app and getting a good visual on the bird with my binoculars, I felt confident that what I was seeing was a northern shrike.  This was a big deal, and when I got back to civilization I made some phone calls to report what I had just seen!  In all of the years I have lived in Arizona, (since 1965) I have never before seen a northern shrike.

When you discover a rare bird, it is important to get photo documentation—and I didn’t have a camera with me, other than the one on my phone.  I needed someone with a good camera to see the bird and capture high quality images to confirm my identification.

After I got home, I made several phone calls to other birders, and I posted my sighting on eBird, an electronic reporting service maintained by Cornell Lab of Ornithology.  I also pulled out my Birds of Prescott, Arizona checklist.  Northern shrike was listed, which meant this species had been seen in Prescott previously.  The code for relative abundance was listed as ‘accidental,’ which means this species has been seen in Prescott five or fewer times since 1973.

Later in the day, I decided to go back out with my 95 mm Swarovski scope and my digiscoping adapter to see if I could use my phone to capture some pictures of the bird.  Of course, the first challenge was to re-find the bird—which I ultimately did.  It was still in the same general area—adjacent to the weedy cap covering the dump, but probably three or four hundred yards from where I had seen it earlier in the day.  After locating it with my binoculars, I got my scope set up.  As I started to assemble my digiscoping equipment, the bird took off and I never found it again!  No pictures!

Thankfully, other birders have since gone out and have gotten great pictures, documenting and confirming the identification of the bird.  It is, indeed, a northern shrike!

Until next week, Happy Birding!  And, Happy Thanksgiving!