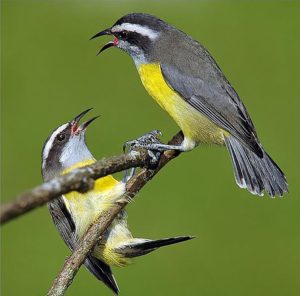 In last week’s column, our birding group had just arrived at Caye Caulker, a small island off the coast of Belize. We stayed on this island for three nights, and by the time we left I felt I had exhausted the birds that could be found there.

I participated on every guided bird walk that was offered, and when there was free time, I would head out on my own. Without exaggeration, I spent close to twelve hours each day birding—and it was ‘only’ twelve hours because that is how much daylight we had. It would start to get light shortly after 6 a.m., and around 6 p.m., it would be too dark to bird effectively.

I have to admit, when I am in a new environment, I do not want to stop birding. I am relentless in my pursuit of finding and identifying all of the birds that can possibly be seen in that area. The island had no cars. The way to get around was to use either a small golf cart taxi, a bike, or your own two feet. I walked and walked and walked. I wished I had had a Fitbit to tell me how many steps I was going each day! I imagine I walked eight to ten miles each day in pursuit of birds.

Between the guided bird walks and my own efforts, I had a very rewarding time on the little island—turning up all kinds of birds in all kinds of places. The highest elevation on the island was probably less than ten feet. Much of the island was swampy and inaccessible—but believe me, I tried to go everywhere I could to see new birds!

Some of my favorite bird sightings include the following species—Magnificent frigate bird; gull-billed, sandwich and royal terns; green-breasted mango (a type of hummingbird), cinnamon hummingbird, peregrine falcon, and Bananaquit. Other highlights include species that we would see only on the island, such as mangrove warbler, Caribbean elaenia, Yucatan vireo, black catbird and white-crowned pigeon.

On Friday, we flew back to the mainland and drove to our next destination—Crooked Tree Lagoon, where we stayed at Bird’s Eye View Lodge. The quantity and variety of birds we saw seemed to double as soon as we got onto the mainland. At the airport, we were treated to a bat falcon sitting on an antenna right by the terminal. As we drove to the lagoon, we made several stops along the way—each time finding new birds for our trip list, and certainly for my life list.

Since we have been on the mainland, we have seen over one hundred species each day. My pace has not slackened either—if there is not a guided bird walk, then I am out beating the bushes on my own. These efforts have yielded many additional sightings that I would not have seen had I not gone out on my own.

The day after we arrived at Crooked Tree, our group took a boat ride in the lagoon. Our boat driver was very knowledgeable about birds and did a fantastic job helping us see an incredible number of birds. Highlights of this trip included Montezuma oropendola, boat-billed herons, yellow-tailed orioles, American pygmy kingfishers, bare-throated tiger herons, snail kite and gray-necked wood rails.

I am not one to have a favorite bird, which is a question I am asked frequently, but I have to tell you, I just loved the gray-necked wood rail. When it was in the sunlight it was just stunning!