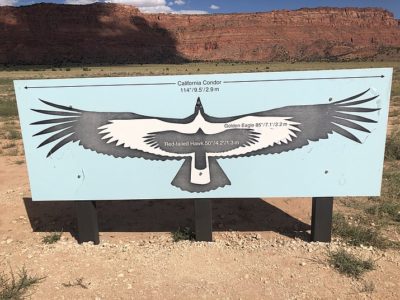 The Vermilion Cliffs are in the background behind this sign illustrating the impressive wingspan of California condors. (Courtesy)

This past Saturday, I attended the California condor release at the Vermilion Cliffs north of 89A. This is the second year in a row I’ve attended, and, I have to admit, this is a really fun event!

Four condors, raised in captivity for the last 18 months, were released, bringing the wild population in Arizona to 96 birds!  What a success story, when you consider that the total number of condors got down to 22 birds in 1982.

The Peregrine Fund, along with several zoos working in partnership with one another, has brought this species back from the brink of extinction through a captive breeding program. There are several wild condor populations now — in Arizona, Utah and California (plus those in captivity for breeding purposes), for a grand total of about 500 condors.

The condor viewing area is on the east side of BLM road 1065, and is about one mile from the cliff face where the condors are released.  In addition to the newly released birds, condors released in previous years hang around the area, providing a good opportunity to see between 10 to 15 birds from the viewing area.

Having good optics is a necessity to view the birds, since they are so far away. As a Swarovski Optiks dealer, we set up eight tripods with various spotting scope configurations, making it possible for all of those in attendance to use the scopes to view the condors.

We also had a table full of binoculars that we allowed individuals to use.

It is interesting to see both common ravens and condors flying together over the cliffs — the size difference between these two species is remarkable! When you see a raven by itself, it is an impressive bird. It has a wing span greater than that of a red-tailed hawk. However, when you put a raven next to a condor, the wingspan for the raven is not even half that of a condor!

California condors are the largest land bird in North America, with a wingspan approximately 30 inches greater than that of both Bald and golden eagles. Needless to say, condors are an impressive sight to see — especially flying free in the wild.

The release each year coincides with National Public Lands Day, which is the fourth Saturday in September. Next year’s event will be on September 26, 2020 if you want to write it on your calendar.

In local bird news, I have a lot of white-crowned sparrows in my yard now. I have yet to see dark-eyed juncos this fall, but I suspect they will be showing up any day. I haven’t seen any yellow-rumped warblers or ruby-crowned kinglets either, but again, I suspect they will show up very soon.

One thing is for sure — the consumption of seed in my yard has really picked up. During the summer months, I didn’t have to fill my feeders very often, as the birds were finding plenty of natural food sources. Now, with winter birds arriving, I am seeing a definite uptick in seed consumption.

I invite you to stop by the store to participate in our 11th Annual Wild Bird photography contest by casting your ballot for your favorite pictures. We have a really beautiful selection of wild bird pictures, and it is difficult to pick a first, second, third and honorable mention choice. Make sure you leave yourself plenty of time to make your selections!

At noon, on Saturday, Sept. 26, we will announce the winners at our anniversary celebration. It will be interesting to see which picture is voted No. 1 by our customers.