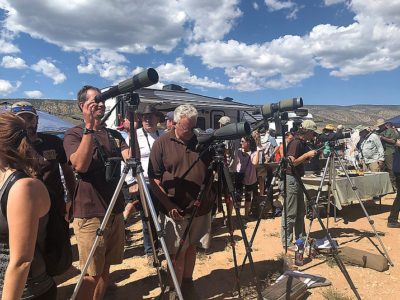 Now that fall is upon us, you can expect to see changes in the variety of birds frequenting your feeders. There has already been limited reports of white-crowned sparrows. Soon, chipping sparrows, dark-eyed juncos, yellow-rumped warblers and ruby-crowned kinglets will be visiting your seed and suet feeders, as well.

In the last week, I’ve witnessed several signs of fall migration. MacGillivray’s Warblers have visited my yard, and every day I see turkey vultures moving south. Nowhere is migration more apparent than at our local lakes. This time of year gulls, terns, pelicans, sandpipers, avocets, stilts, dowitchers, snipe, ducks and grebes use Watson and Willow lakes as a stopover during their migration.

Interestingly, you might experience fewer birds at your feeders this fall and winter due to our summer monsoon rains. This is because our plentiful summer rains have resulted in an abundance of natural food sources available to wild birds. In contrast, last year our poor monsoon season resulted in very little natural forage, so our winter birds were stressed and were hitting seed feeders hard.

At my home, off of Rosser Street, we have received 12.25 inches of rain since July 1. On Saturday alone we received 2.30 inches of rain! If your yard is anything like mine, there is a profusion of seed-bearing plants creating a natural buffet of food for our arriving migratory birds.

This Saturday, Sept. 25, you have the opportunity to watch California condors take their first flight in the wild. This is the 26th annual in-person public release of captive-bred condors at Vermilion Cliffs National Monument. The event is hosted by The Peregrine Fund and the Bureau of Land Management.

Juvenile condors being released were hatched at The Peregrine Fund’s World Center for Birds of Prey in Boise, Idaho, as well as at several partner organizations, including the Oregon Zoo, Los Angeles Zoo and San Diego Zoo Safari Park before being transported to the Vermilion Cliffs to be released into the wild.

While the condors will be released at noon, it is advisable to get there early, around 10 a.m. In spite of the remote location for this event, there will be literally hundreds of anxious onlookers armed with cameras, binoculars and spotting scopes. It is a real party-like atmosphere.

Jay’s Bird Barn and Swarovski Optiks will be in attendance as a vendor (selling optics), and we will be loaning equipment to participants so they can watch the release. Optics are a necessity, as the viewing area — high upon the cliff face — is well over a mile away (perhaps two) from where the condors will be released.

In my column last week, I wrote about my experience of seeing the critically endangered Beesley’s lark last week in Tanzania. It is estimated there are only 50 Beesley’s larks left in the world, and nothing is being done to save them from extinction.

We are blessed to live in a country where we have both the will and the resources to protect species and even bring them back from the brink of extinction. In the 1980s there were only 22 California condors left in the world!Now there are more than 500, with populations in Arizona, Utah, California and Mexico.

To get there, take Highway 89 north from Flagstaff until you get to the 89A intersection. Stay on 89A for about an hour, then turn north onto BLM Road 1065 (a dirt road) and continue for about three miles. The viewing area has nice clean restrooms, a small shade structure and an informational kiosk. I strongly recommend bringing a folding chair, a hat, sunscreen, food and water. I hope to see you there!

Eric Moore is the owner of Jay’s Bird Barn in Prescott, Arizona. Eric has been an avid birder for over 50 years.If you have questions about wild birds that you would like discussed in future articles, email him at eric@jaysbirdbarn.com.