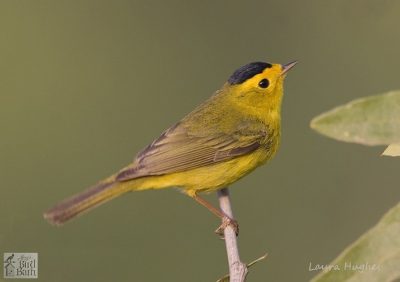 “Male Wilson’s warblers are a striking bird with their bright yellow plumage and jet black on the crown of the head.”(Laura Hughes, Jay’s Bird Barn/Courtesy)

This past week, in an effort to add to my Arizona year list, I made a trip up Mingus Mountain to look for migrating warblers.

In the spring, I had the goal to see a variety of warblers that were moving through this region on their way north. I knew that if I didn’t catch them during spring migration, my only hope was to wait until fall migration when they would be passing through again, on their way south.

I did really well in the spring — I saw 16 different warbler species!  Unfortunately, I missed two species that I was hoping to see — hermit and Nashville warblers both eluded me. So, these two specific species were my target birds, and my destination was a place called Butterfly Springs.

I arrived a few minutes after 6 a.m., and it was cool and shady.  The second I stepped out of the car, it was instantly birdy, and I saw a hermit warbler within minutes of arriving.

Normally, after parking, I would start hiking in an effort to go look for birds. On this particular day, I didn’t need to go looking to find birds — they were all around me. My challenge was trying to stay focused on one bird at a time. There was so much activity, it was hard to not get distracted. I literally spent the first hour and 10 minutes within 100 feet of my car — my car was never out of my sight.

Not far from where I parked, there was an old, gnarly looking juniper tree. It didn’t look like it would be particularly appealing to birds, but it was like a bird magnet.  I just stood in the same place and watched flocks of birds, including pygmy nuthatches, mountain chickadees, bushtits, plumbeous vireo, dark-eyed junco, painted redstart (a type of warbler), orange crowned warbler, Virginia’s warbler, black-throated gray warbler, hermit warbler, Wilson’s warbler and red-faced warbler, working through the foliage as they searched for insects — all in that one tree!

With great hesitation, I left this rich birding spot and hiked up the trail to a small retention pond. It ended up being a great decision. I found a rock to sit on, and stayed virtually motionless for the next hour as I watched one of the most memorable birding experiences I can remember in recent years unfold before me.

Bird species that one wouldn’t normally see down on the ground flew down to the edge of the pool to drink. Being out in the open was a great risk to them, as they were highly susceptible to predators. Something would startle them, and they would then fly up into the surrounding trees, only to come back down again.

I watched this scene over and over again and saw Townsend’s warblers, Grace’s warblers, olive warbler, Nashville warblers, MacGillivray’s warblers and even white breasted, pygmy and red-breasted nuthatches come down onto the ground to drink.  In the end, I saw 12 different warbler species that morning!  Eventually I had to pull myself away, as I had to work at the Bird Barn. It was an incredible morning!

As a reminder, our cardinal map is up at the store. If you live in the Prescott area and are seeing cardinals in your yard, we’d love to record where you live.

Also, Tuesday, Sept.1st, is the beginning of the submission period for our 12th annual Wild Bird Photography Contest. I invite you to come by the store to get a flyer or to drop off your pictures. The deadline for submission is Sept. 30th.