Birding: Birds in the garage 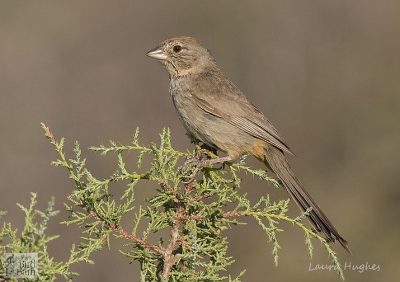 It has been an interesting week in terms of birds—both in my yard and in my garage! On two occasions last Saturday, I had a canyon towhee in my garage, poking around. While this might seem unusual, it is common behavior for this species. Over the years, customers have shared with me similar observations.

Over 40 years ago, in Tucson, I had an experience with a canyon towhee that really surprised me. I was bending over in my birdfeeding area, cleaning out my bird bath, when a canyon towhee flew in and landed on my back! My experience over the years with canyon towhees has reinforced the fact that they are relatively tame and quite fearless.

Interestingly, for the first 10-plus years we lived in our home off Rosser Street, I never saw a canyon towhee in my yard. However, over the last few years they have moved into our neighborhood, and now they are what I would consider a permanent, common resident in my yard.

Not familiar with canyon towhees? If you have an older field guide, you will not find canyon towhee in your bird book as this species used to be called a “brown towhee.” Many years ago, this singular species was split into two species. The race that occurs in the Interior West was renamed “canyon towhee” and the coastal race was named “California towhee.”

The range for canyon towhees is extensive, occurring anywhere from the Sonoran Desert up to pinyon/juniper elevation, and in between. Canyon towhees are primarily seed eaters and are usually found hopping around down on the ground looking for food. They are closely related to spotted towhees, which are very common in the Prescott area.

Two days after seeing the canyon towhees in my garage, I had a Bewick’s wren in the garage, even though initially I was quite unaware of it. I was at home, and the garage door was down. However, when my wife came home and opened the garage, she noticed the wren flying against the inside of one of the garage windows in an effort to get out. How long it had been in the garage is anyone’s guess. We left the garage door open for a while, and he finally found his way out.

I continue to monitor the two quail families that are hanging around our yard. One family is made up of a mom and dad with nine babies, and the other family is a single dad with nine slightly younger babies.

I was out doing yard work the other day when I saw the single dad and his brood moving in my direction. I had the feeling they hadn’t seen me, and I made a quick decision to sit down on the ground so my six-foot presence would be less fear-inducing. I sat and waited patiently, holding perfectly still, and eventually the babies started coming out of the nearby bushes, one-by-one, and they walked right toward me!

By the time dad came out of the bushes and saw me, the babies were several feet ahead of him. He was very wary of me — he kept eying me and was acting very nervous the entire time. The babies didn’t seem to have any fear and came within eight feet of me. It was such an intimate moment to see them so closely.

On a different note: we have scheduled our free weekly bird walks for the next quarter — July, August and September. Go to the Jay’s Bird Barn website to see the dates and locations for our upcoming bird walks. You can either come by the store in person or call the store to sign up.

Eric Moore is the owner of Jay’s Bird Barn in Prescott. Eric has been an avid birder for over 50 years. If you have questions about wild birds that you would like discussed in future articles, email him at eric@jaysbirdbarn.com.