Birding: Birding with my boys in northern Utah 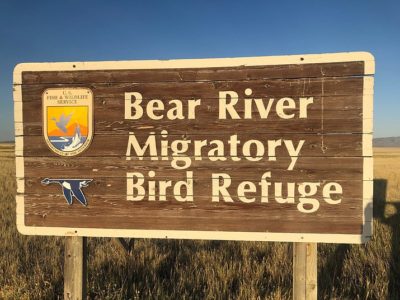 I made a quick trip to Utah this past week to help a friend move from Prescott to Logan. This gave me the opportunity to visit two of our sons that live in Provo, and to do some bird watching in northern Utah.

While I grew up in Tucson, I have spent a lot of time in Utah over the last 40-plus years. My parents moved there in 1977, and I ended up living there while attending college. I met my wife in Utah, and our first son, Travis Jay (as in Jay’s Bird Barn), was born in Utah. And, as you might imagine, I have done a lot of birding in Utah over the last 40 years.

One of the things that is very impressive about northern Utah is the amount of water there. It seems everywhere you go there are incredible lakes, impressive rivers and plenty of wetlands and marshes. All of this water contributes to great birding opportunities.

My son, Landon, met me in Logan, and we immediately started birding. Our first stop was Tony Grove Lake, up Logan Canyon. This area is classic high elevation Rockies. I saw a lot of ‘our’ winter birds there, such as red-naped sapsucker, ruby-crowned kinglet, white-crowned sparrow, Brewer’s sparrow, dark-eyed junco and yellow-rumped warbler.

Our next stop was in Cache Valley, west of Logan. This area is a combination of agricultural fields and wetlands. It seemed like there were birds everywhere!  The fields were filled with Canada geese, white-faced ibis, Franklin’s gulls, California gulls and ring-billed gulls.  We saw sandhill cranes, killdeer, Wilson’s snipe, eastern kingbirds, American goldfinch, black-billed magpies and so much more!

The next morning, we spent several hours at the Bear River Migratory Bird Refuge, just west of Brigham City. There is a 12-mile auto tour loop that goes through the refuge, which affords the opportunity to view birds in a variety of habitats — lakes, rivers, marshes and grassland. We saw thousands of birds here, including pelicans, grebes, herons, egrets, ducks, ibis, stilts, curlews, phalaropes, sandpipers, avocets, gulls and thousands of swallows.

The refuge is part of the Great Salt Lake ecosystem, and is considered the most popular birding hot spot in northern Utah.  It was established in 1928, and encompasses 74,000 acres. This area boasts the world’s largest concentration of American avocets, Wilson’s phalaropes, California gulls and snowy plovers. The refuge also hosts the largest white-faced ibis breeding colony in North America!

The highlight for me was seeing not one, not two but three short-eared owls! It has probably been 20 years or more since the last time I saw this species—certainly before I was entering my bird sightings into eBird. Seeing this magnificent species was a thrill, and it is now officially on my ‘life list,’ as I recorded these observations into my eBird account.

From there we went down to Antelope Island State Park, an island surrounded by the Great Salt Lake. Words are inadequate to describe the sheer quantity of birds. Thousands of phalaropes, gulls, shorebirds and grebes.  The biology of this area is fascinating.  Billions and billions of brine shrimp and brine flies support hundreds of thousands of birds.

Eventually we made our way south to Provo (birding along the way, of course) and added new species to our trip list at every stop. We ended up seeing four upland game bird species—wild turkey, ruffed grouse, ring-necked pheasant and California quail. I have to say, I thoroughly enjoyed spending time with Travis and Landon, and I loved the time I was able to spend bird watching.