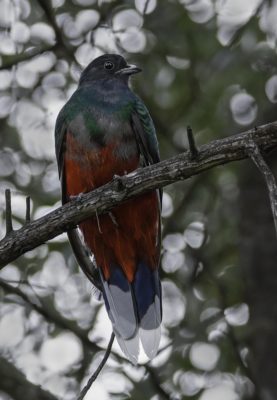 Each day, I receive rare-bird email alerts through eBird. I enjoy looking through the emails each day to see what other people are finding around the state. I don’t typically drop everything and chase rare birds…but sometimes, the temptation is just too great.

Recently, an extremely rare bird species has been seen in southeastern Arizona, in the Chiricahua Mountains. These sightings have been particularly alluring, as the birds were in a location that was easy to access, and they were being seen daily, so the odds of seeing them were pretty good. The challenge was clearing my schedule to make a quick trip down there.

Last Wednesday, I drove from Prescott to the Jay’s Bird Barn store in Flagstaff. When I finished working there, I headed for the Chiricahuas. It was a long day of driving, and I arrived just as the sun was setting. A dear friend who owns the George Walker House Bed and Breakfast in Paradise invited me to stop by her home that evening for dinner. We sat out on the porch and watched the feeders as we ate dinner, and I saw 28 species before dark.

I spent the night at Portal Peak Lodge, on the eastern side of the mountain range, which is only a few miles from the New Mexico border. My friend and I made plans to get up early Thursday morning and meet in the parking lot at 6 a.m. to go to the ‘stakeout’ spot for the rare bird.

I was unaware that the cell tower providing my phone service was in New Mexico, so the time on my cell phone changed automatically to New Mexico time—even though I was in Arizona. At 5:45 a.m. Thursday morning, I stepped out of my room to do some birding around the property only to discover it was pitch dark. It wasn’t 5:45 a.m.—it was 4:45 a.m.!! I had gotten up an hour too early.

Eventually it was time to meet, and we headed into the mountains to the stakeout spot. By 6:32 a.m., I was on the target bird — a life bird — an eared quetzal. Wow—what a stunning species! We actually saw two of them — a male and a female. They were amazingly close, and I had my huge Swarovski scope, so I got fantastic views of both birds. What a thrill!

I spent the rest of the day birding at some of the higher elevations in the Chiricahuas — at Barfoot Park, Rustler Park and countless other stops that looked promising. Everywhere I stopped I added new birds to my trip list. Later in the day I spent time in the desert habitat at the base of the mountain and added many more bird species to my day list.

The next morning, I left Portal and drove back to Willcox. I made a four-hour birding stop at the Twin Lakes Golf Course and Cochise Lake — which is not much more than a small pond. The birding was amazing — I saw 70 species at this location before I pulled myself away and began my drive back to Prescott.

From the time I left Prescott Wednesday morning, until the time I got home Friday afternoon, I had driven 959 miles and saw more than 150 bird species. It was a wonderful, fruitful trip.

On another note — the submission period for our 12th annual Wild Bird Photography Contest has ended, and the exhibit is now open to the public. I invite you to come by the store to look at the display and vote for your favorite pictures.