Birding: Birding on the island of Trinidad 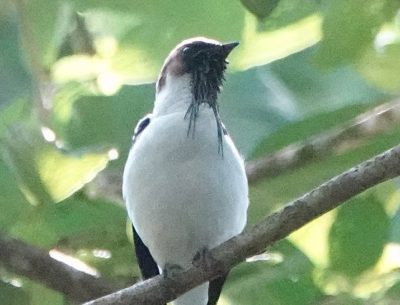 We certainly heard the bearded bellbird before we saw it. (Eric Moore/Courtesy)

Our first full day at the Asa Wright Nature Center included an introductory bird walk on the grounds of the 200-acre facility. The target bird to see was a bearded bellbird. I would encourage you to Google YouTube videos of this unusual species.  Recently the bellbird was identified as the loudest bird in the world!

We certainly heard it — long before we saw it.  Eventually we found two males that were calling over and over again. Using my Swarovski scope, everyone got great looks at them. This experience was one of the many highlights in our week of birding on the island of Trinidad.

Several days later, a naturalist at the Nature Center took our group of birders on a guided bird walk to Dunston Cave, a riparian grotto on the grounds of the Nature Center, to look for oilbirds.  Oilbirds are the only nocturnal fruit-eating birds in the world, and they use low-frequency echolocation to find their preferred food — palm fruit.

This is a very bizarre-looking bird. It is large and cryptically colored, and spends its day roosting in almost total darkness. It then comes out at night to feed, much like bats and nightjars. I would encourage you to Google images of this species, as it is unlike anything you have ever seen. When we arrived at the roosting site, we were given only a minute or two to view the birds to minimize disturbing them — but that was long enough to add it to my life list!

We stayed at the Asa Wright Nature Center six nights, where we were entertained each morning and night by the hundreds of colorful birds that were frequenting the fruit and nectar feeders. Then, each day our guide took us down the mountain to visit specific habitats and locations to find different species that we wouldn’t see up in the mountains.

We visited the Arena Forest, Nariva Swamp, Aripo Savannah and the Northern Range. One night we did evening birding where we saw white-tailed nightjars, common pauraques and common potoo. However, out of all of our excursions, there was one field trip that was THE highlight of the trip. Late one afternoon we took a boat ride in the Caroni National Park Bird Sanctuary.

The bird sanctuary is 40 square miles of mangrove/swamp habitat, and is world-famous for the nightly spectacle of thousands of birds coming to roost on two islands in the middle of the swamp. Initially, the captain of the boat took us on a slow boat ride, where we birded along the way until it was time to get into position to witness the flocks of thousands and thousands of birds as they came in to roost.

Our time at Caroni Swamp was a magical experience, not soon to be forgotten. Looking at the island after thousands of birds had descended upon it was like looking at a Christmas tree with scarlet ibis ornaments.  There were birds perched all over the trees, creating a stark contrast between the deep, vibrant greens of the forest and the scarlet-colored ibises.

Our time on Trinidad passed quickly, and soon we found ourselves preparing to leave that island to fly to Tobago, in order to continue our birding adventures. I will write about Tobago next week!