Birding: Birding in the Midwest results in delightful discoveries 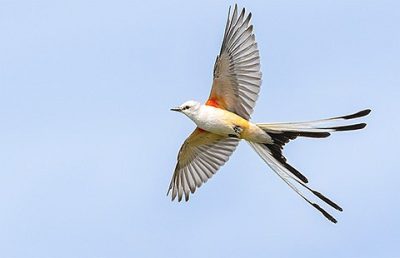 Last week, Gayla and I flew to Oklahoma City to spend time with our son, Merritt, and his family before continuing to Missouri to attend the annual Wild Bird Expo in Mexico, Missouri. I’ve been attending this annual trade show in Missouri since 2005!

While in Oklahoma, I was able to get outside and do a little bird watching each day, which I thoroughly enjoyed. Some of the places I visited include Mitch Park, Arcadia Lake, Scissortail Park, Hafer Park, and Fink Park.

I really enjoyed birding at Arcadia Lake, but I regretted the fact that I didn’t bring a spotting scope with me on this trip. The lakes in Oklahoma are so much larger than our lakes in Prescott, and the birds are much farther away. While my binoculars are great, they don’t compare to the magnification offered by a spotting scope.

Using a pair of binoculars with fixed magnification (I use twelve power) is no comparison to a spotting scope that has variable magnification. The magnification on my Swarovski scope starts at thirty power and can zoom all the way up to seventy power! This added magnification helps me to identify birds that are incredibly far away, as I can observe the finest details and see the plumage of birds at great distances.

When birding at a lake, having variable magnification is critical. With terrestrial birding, if I observe a bird a distance away, I can just walk closer to get a better look. However, when observing birds on a body of water, since I haven’t mastered walking on water (yet), I must bring the birds closer to me. I do so with higher magnification.

I also really enjoyed our time at Scissortail Park, an urban park in downtown Oklahoma City. I was so impressed with the vision of their city to create a multi-use facility to bring people together. The park is named after the state bird of Oklahoma, the scissortail flycatcher. I have seen several scissortailed flycatchers on this trip, which is quite a thrill as they are beautiful birds.

My Oklahoma state bird list has grown significantly, and I officially added one “new” species to my Life List, even though I’ve seen it before. My new bird was a clay-colored sparrow, a very delicately marked sparrow species that migrates through the center of the United States each fall and spring.

The first time I ever saw this species was several years ago at Gilbert Water Ranch (in Gilbert, AZ), but apparently, I didn’t record this sighting into eBird. When I saw it in Oklahoma this past week, and recorded my sighting in eBird, it showed up as a new species for my Life List.

I have enjoyed birding in this part of the country as it is like seeing old friends — bird species with which I am intimately familiar, but don’t get to see very often. Some of the more common species I’ve seen this past week include red-shouldered hawk, blue jay, brown thrasher, Carolina chickadee, Carolina wren, tufted titmouse, yellow-bellied sapsucker, eastern bluebird, and white-throated sparrow.

A quick reminder — our free wild bird photography exhibit is open to the public as part of our month-long anniversary celebration. Please come check it out and vote for your favorite pictures. We will announce the photography contest winners at noon on Saturday, Oct. 29, at our 19th Anniversary Celebration Open House event.