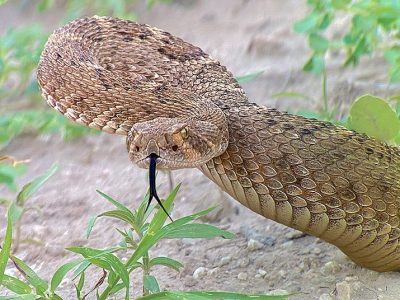 This past week was a whirlwind. Here’s a brief recap.

My last day of guiding the group of birders from Las Vegas was on Wednesday. We visited the Environmental Operations Park in Sierra Vista and birded the San Pedro National Riparian Conservation Area. Recent heavy rains prevented us from birding in the riparian area along the San Pedro, so we spent most of our time in the desert scrub.

We picked up additional bird sightings for our trip list, including Cassin’s and Botteri’s sparrows, but we missed seeing rufous-winged sparrows — a target bird for that location. At one point we left the trail and ascended a small berm to get a better vantage point. Since I was leading, I went first, and everyone followed. However, as the last birder passed between some low desert shrubs, she was startled by the rattling of a diamondback rattlesnake.

Amazingly, all of us had passed within about a foot of the rattlesnake, and it never rattled until the last person in the line passed that point. Thankfully we were all safe, but it was unnerving. The snake was in full strike position and was clearly agitated when the last birder attempted to walk by.

The hours for staffing our vendor booth were 10 a.m. to 5 p.m., Thursday, Friday, and Saturday, which meant we had several hours before and after to go bird watching — which we did!

Thursday morning, we went on base (Fort Huachuca) and hiked for a couple of hours in Huachuca Canyon. Historically, this has been one of the most reliable places to see elegant trogons, but, unfortunately, not that morning. Probably our best find of the day wasn’t even a bird; it was a gorgeous mountain kingsnake.

That evening, we hiked Escapule Wash, a fascinating habitat which starts as a dry wash then comes alive with spring-fed water for a distance, until the water disappears again back into the sand. The wash empties directly into the San Pedro River, which was flowing robustly.

After looking at eBird reports Thursday night, we made the decision to drive all the way to Willcox Friday morning to bird at a place called Cochise Ponds. There were reports of phalaropes, ibis, stilts, avocets, curlews, greater and lesser yellowlegs, and countless sandpiper species including stilt, pectoral, Bairds, western and least.

When we arrived, there was hardly a bird to be seen! I was so disappointed, as I had visions of an impressive bird count for that location. However, we did pick up several new birds for the week, including scaled quail, peregrine falcon, black-crowned night heron, and long-billed curlew. Overall, we saw far fewer bird species than what had been reported just the day before.

Friday night we went back to the San Pedro Conservation Area and basically got eaten alive by mosquitos. Surprisingly, we were greeted again by the rattling of a large diamondback rattlesnake.

On Sunday, I flew to Oklahoma for a quick visit and flew back on Monday. Interestingly, on Saturday I saw eastern bluebirds in Carr Canyon in the Huachuca Mountains, and then I saw eastern bluebirds in Oklahoma City on Sunday! It was interesting to see the same species a day apart in two different parts of the country, and in very different habitats.