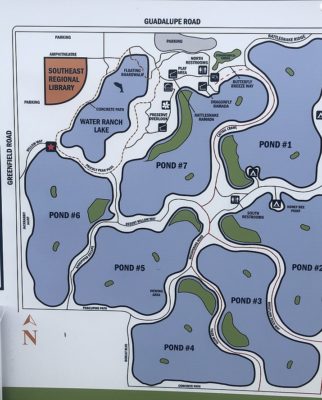 Here is an overview of the ponds at Gilbert Water Ranch. (Courtesy)

I received a lot of feedback this past week on the new film produced by the Arizona Game and Fish Department that aired last week on Arizona PBS channel 8. The film, ‘Birding Across Arizona’, featured several popular birding destinations in the state of Arizona, including the Riparian Preserve at Water Ranch (Gilbert Water Ranch).

Located at the southeast corner of Greenfields and Guadalupe in Gilbert, the preserve was created in 1999. In my mind, it is one of the best destinations for bird watching in the state of Arizona. Reviewing eBird data for this location shows that 308 bird species have been seen at the Water Ranch. This is an amazing number of birds, considering the facility is only 110 acres. You would be hard pressed to find more than 300 species anywhere in this country in an area that small.

This past Friday, a friend and I had the opportunity to go birding at Gilbert Water Ranch, and we thoroughly enjoyed our time there. We arrived at sunrise, and we set a goal to see 60 species.  I felt it was a realistic goal, but that it would also stretch us.

One of the first birds we saw was a roadrunner, which is always a harbinger of a good birding day. We quickly started racking up a list of desert birds — gila woodpecker, Inca dove, curve-billed thrasher, Abert’s towhee, verdin and Gamble’s Quail.

However, the real attraction — to both people and birds — is the water. Water in the desert creates an artificial oasis. In birder lingo, we refer to an area such as the Water Ranch as a ‘migrant trap.’ Large shallow ponds do not occur naturally in the Sonoran Desert, so this man-made environment is like a bird magnet.

There were hundreds of migratory shore birds in the ponds, including long-billed dowitchers, least sandpipers, American Avocets, black-necked stilts and even a few greater-yellowlegs. There were also large numbers of water fowl, such as green-winged teal, cinnamon teal, ring-necked duck, northern shoveler, gadwall, mallard and Canada Geese. We also saw cormorants, grebes, herons and egrets, along with American coots and a common gallinule.

My friend had a specific target bird in mind — a peregrine falcon — something he’d never seen before. We were about three hours into our bird walk before I finally spotted a peregrine a great distance away. Fortunately, I had my Swarovski scope, so it was easily identifiable. Once we found it, we hurriedly made our way toward it to achieve a closer look. Success!

We also saw a very uncommon eastern warbler — a northern parula. It was a beautiful male, and we were probably only 15 to 20 feet from it so we got great looks at it. In addition to the peregrine and the parula, my friend added several life birds to his life list, including the gallinule, Wilson’s snipe and marsh wren.

After four hours of birding, we tallied our list. We had seen 61 species — we hit our goal!

I am happy to announce we have recently created a photography exhibit showcasing our recent Jay’s Bird Barn trip to Trinidad and Tobago. I invite you to come by the store to view the exhibit, which contains wonderful photography and supporting text so you can learn about our experience visiting the two islands.

This past week, I was asked by the Prescott Audubon Society to present a program on our trip to Trinidad and Tobago. The meeting will be held Thursday, April 16, at 7 p.m. at Trinity Presbyterian Church. The church is located at 630 Park Avenue, if you want to put it on your calendar.