Birding: Berries are a way to attract bluebirds to your yard 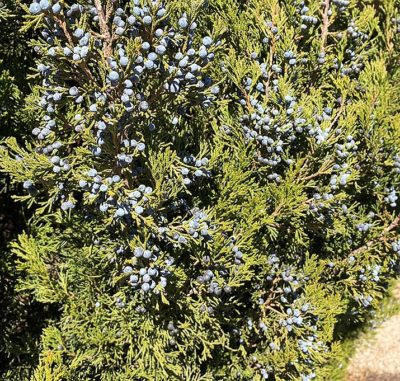 Trees on the property of the community center on Rosser Street in Prescott are loaded with berries. (Eric Moore/Courtesy)

I was driving eastbound on Rosser Street earlier this week, and just before I got to the community center, I saw a small bird perched atop a street sign in the median. Since I was driving, I only had a brief look with the naked eye, but I was pretty confident that what I saw was a mountain bluebird. I was so surprised, that I made a U-turn and went back to get a better look.

Fortunately, my binoculars were on the front seat with me, and I was able to confirm that it was, indeed, a mountain bluebird. In the 30 years I’ve lived in Prescott, I don’t believe I have ever seen a mountain bluebird here. I’ve certainly seen them in the area, but not in Prescott proper.

One of the reasons I think the mountain bluebird was there is because the area between the curb and the parking lot of the Community Center has some type of juniper tree that is loaded with clusters of little blue berries.

Historically, the most reliable place to see mountain bluebirds in winter is at Sullivan Lake, off of Old Highway 89 in Paulden. There have been several times over the years when I have seen hundreds of mountain bluebirds congregated at this location, taking advantage of the water in the lake.

Bluebirds are closely related to thrushes and they are not seed-eaters. Their diet in spring and summer consists of mostly insects, and in fall and in winter their diet is mostly berries. They readily frequent birdbaths and water features, but they shy away from seed feeders.

The best way to attract bluebirds to your yard is through plantings — particularly native plants that produce fruits and berries. As I spent time watching the cedar waxwings and bluebirds in my yard on Saturday, I discovered what was attracting them. In addition to the water feature in my yard, there is a large fruited Bradford pear tree in my neighbor’s yard, loaded with small fruit, and this was drawing them in.