Birding at the Gilbert Water Ranch 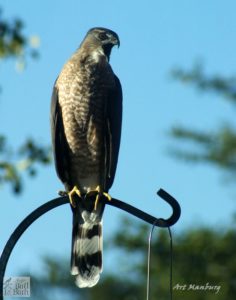 This past Saturday our family spent some time in the Phoenix area, which included time in Gilbert. I can’t go to Gilbert without visiting The Riparian Preserve at Water Ranch, a 110-acre facility with seven large ponds, numerous trails, walkways, and wonderful native habitat.

It is a birders’ paradise in a sea of urban development. In just an hour or two, I saw more than 50 different bird species including sparrows, doves, quail, finches, hawks and a lot of water birds. Some of the duck species I saw were mallard, shoveler, bufflehead, ring-necked, ruddy, and all three teal: blue-winged, green-winged, and cinnamon.

There were numerous large waders such as great blue herons, black-crowned night herons, green herons, great egrets and snowy egrets. There were also a lot of small waders such as long-billed dowitcher, least sandpiper, American avocet, black-necked stilt, greater yellowleg and Wilson’s snipe.
One highlight was seeing a lone osprey flying around and around looking for the perfect opportunity to dive for a fish. I also saw Belted Kingfisher – another species that dives into the water to catch fish.

At one point, I discovered a double-crested cormorant that had successfully caught a very large fish and was struggling to swallow it. The cormorant was having great difficulty and the task of swallowing the fish looked impossible. The cormorant’s eyes were bigger than its throat!

The cormorant repeatedly adjusted the position of the fish trying to get it head-first so it would slip down its throat. He would flip the fish this way and that way, frequently dropping it and then retrieving it again. Sometimes he would get the fish part way down, and then would end up choking it back up. However, in the end, the cormorant successfully swallowed the whole fish.

Bottom line: The Water Ranch is a very birdy place. Whether you can just afford an hour or whether your schedule allows you to stay for several hours, I highly recommend the Water Ranch as a birding destination.

To underscore how popular the Water Ranch is, the day I was there the Desert Rivers Audubon Chapter was conducting bird walks at the facility, and there were signs promoting an upcoming ‘Feather Friends’ festival this coming Saturday, March 26. I don’t know much about the event, but you could probably Google it on the Internet.
Don’t forget that tonight is the Prescott Audubon Society’s monthly membership meeting at 7 p.m. at Trinity Presbyterian Church located on the corner of Park Avenue and Copper Basin Road. This month’s meeting will be a presentation on live birds of prey from the Heritage Park Zoological Sanctuary. If you enjoy seeing hawks, owls and falcons up close then this program is for you.