Birding: A whirlwind of birding in Texas 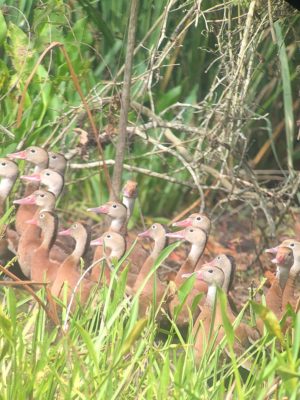 After working at the Flagstaff store last week, I drove directly to Phoenix and took a flight to Houston with two of my birding friends from Prescott. We arrived late, but that didn’t stop us from getting an early start the next morning.

We were on the road by 5:30 a.m., and we didn’t finish our day until 9 p.m. It was an exhausting, and yet an exhilarating day. We started our day birding at Anahuac National Wildlife Refuge, east of Galveston Bay. The birding was awesome, and we could have easily spent much more time there, but we had an itinerary to which we were trying to stick.

Highlights at the refuge included black-bellied whistling ducks, crested caracara, roseate spoonbills, tri-colored herons, anhinga and white-tailed kite. Our second stop was High Island, one of the most famous bird watching locations in North America. High Island is best known for the spring migration fallout that occurs each year as birds reach the mainland of Texas after crossing the Gulf of Mexico.

We were not there to witness this spring-time phenomenon, but we still wanted to bird the area —perhaps do a reconnaissance for a future visit? From there, we went west on the Bolivar Peninsula and birded from one end to the other, until we arrived at Bolivar Flats about an hour before sunset.

The birding at this location was akin to a spiritual experience — the sheer quantity and variety of birds was almost overwhelming, and it was difficult to take it all in. There were literally thousands and thousands of birds representing a wide range of species, including gulls, terns, pelicans, avocets and shorebirds. All I could think about was wanting more time — another hour of daylight — to witness this spectacle of nature.

Highlights at Bolivar Flats included black skimmers, American Oystercatcher, reddish egret, sandwich terns, and thousands of avocets feeding in the ocean, which was something I had never seen before.

Friday morning, we drove from Houston to Rockport and took a boat ride to go see whooping cranes in Aransas National Wildlife Refuge. What a wonderful experience it was to see these endangered birds in the wild. It is estimated that there are about 600 whooping cranes in the world! We saw maybe a dozen of them.

From there we went west to Corpus Christi to Hazel Basemore County Park. We were blown away by the variety of birds, including green jay, olive sparrow, white-tipped dove and white-tailed hawk. It was another exhausting, but fulfilling day—we returned about 11:15 p.m.! On Saturday we went to Brazos Bend State Park, and spent most of our day bird watching there before heading to the airport for our return flight. Our three-day birding adventure netted close to 150 species. I actually added two new species to my life list—seaside sparrow and Nelson’s sparrow! That was very exciting for me.

I had Sunday to recover from my Texas trip before leaving early Monday morning with Gayla to Edmond, Oklahoma. We drove a moving truck for our son, Merritt, and his family, who are moving there — I see more bird watching in my future!

On another note, the Friends of Acker Park are sponsoring their J.S. Acker Appreciation Day this Saturday, Nov. 21, at 9 a.m. Projects include painting and repairing benches, invasive weed removal, trail maintenance and repair, and refuse removal. All tools, water and snacks will be provided. This is a community event, and everyone is invited to come out and help. Meet at the children’s playground at the south end of Virginia Ave.