Birding: A whirlwind of birding activity this past weekend 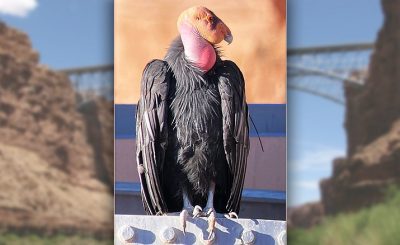 I saw five California condors, including this adult, at Navajo Bridge this past Saturday. (Jay’s Bird Barn/ Courtesy)

This past Friday morning I led a Jay’s Bird Barn-sponsored bird walk to the south shore of Willow Lake. We had an amazing morning! It seemed as if we saw a new bird species for the day at every turn, including several interesting migratory bird species.

We saw two flocks of American avocets, and one flock had over fifty birds! For some inexplicable reason, they flew back and forth over the lake for probably two hours and never landed. There were so many times when it looked as if they would finally land, and then they’d pull up again and continue flying over the lake.

In addition to the avocets, we saw a flock of ten white-faced ibis, a single American pelican, two Forester’s terns, and five Caspian terns. The Caspian terns were especially fun to watch, as they were actively plunge-diving for fish.

We also saw a good variety of birds of prey, including American kestrel, peregrine falcon, red-tailed hawk, northern harrier, and an osprey. I must admit, each discovery was like an exclamation on how productive of a day we were having.

A few hours after the bird walk, I was on my way to Page, Arizona in preparation to attend the California condor release slated for the next day. Early Saturday morning I made a brief stop at Navajo Bridge over Marble Canyon where I saw five condors. I was able to get some excellent photographs using my iPhone in combination with my Swarovski spotting scope, including the picture accompanying my column today.

I arrived at the Vermilion Cliffs (the viewing area for the condor release) before 9 a.m. and set up our vendor booth. We set up about nine Swarovski spotting scopes, all focused on the pen from where the condors would be released at noon. Hundreds of people were in attendance and took advantage of our scopes. What a thrill for the participants to see the condors so well, even though they were about a mile away!

After the condor event wrapped up, I made a mad dash to the Kaibab Plateau. Earlier in the week, there were several reports of white-winged crossbills at the DeMotte Campground, which is about twenty-five miles south of Jacob’s Lake Lodge. In less than an hour, I went from a hot, dusty environment to a lush coniferous forest, 8,800 feet in elevation.

Unfortunately, I was unsuccessful in finding the white-winged crossbills, but I saw several red crossbills, Cassin’s finches, pine siskins, Steller’s jays, and a lone golden eagle. It was well worth the trip! After a long day of being both a vendor and a birder, I arrived home at 9:30 p.m. having traveled 642 miles from when I left Prescott the day before.

This is a final reminder for the Jay’s Bird Barn 14th Annual Wild Bird Photography Contest. Tomorrow, Friday, September 30th, is the last day of the submission period. It’s not too late to submit your pictures!