Birding: A trip down memory lane with a little birding thrown in 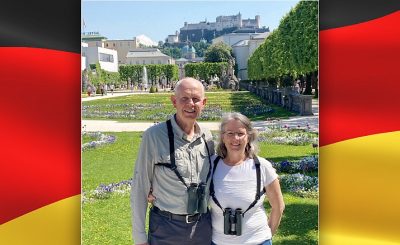 My wife, Gayla, served as a missionary for the Church of Jesus Christ of Latter-day Saints in the Munich, Germany Mission from December of 1981 to June of 1983. Later, when we married, she wanted to share her love of Germany with me by taking a trip there together.

Here we are in 2022, and we are finally visiting her beloved Germany for the first time. She has friends, a married couple, who also served their missions in Germany, and they are now living in Austria. The idea to come visit them was hatched a few months ago, and here I am, in Europe, for the first time in my life.

As much as I would love for the focus of this trip to be on birds, it is not. But, as you might imagine, I’m squeezing in birding whenever I have the opportunity. While I have not seen a lot of bird species, almost everything I have seen is new, except for several European species that have been introduced into North America, such as European Starlings, house sparrows, Eurasian collared-doves and pigeons.

Birding here is challenging, as I have no familiarity with the species here. Also, there is the language barrier. I can’t recognize any of the vocalizations I’m hearing — bird vocalizations that is, let alone the locals!

Interestingly, it has been easy to learn the names of the varieties of birds that occur here. There are three words that precede the names of many of the bird species here: common, European, and Eurasian. For example, here are some of the “common” birds I have seen — common wood-pigeon, common swift, common buzzard, common house-martin, common firecrest, common redstart and common chaffinch.

Some of the species with the word “European” preceding their name include European Redstart, European goldfinch, European serin and European Starling.

Having seen all these bird species — and many more — you may not be convinced this is not a birding trip! However, I’m trying to let this be my wife’s trip. This past week we visited two cities in southern Germany, Erlangen and Nürnberg, where she served as a missionary over 40 years ago! Talk about a walk down memory lane.

As we planned our trip, knowing that we’d be spending time in both Germany and Austria, I concocted a few plans. First, since I serve as a City Councilman for the City of Prescott, I thought it would be a fun experience (at our own expense) to visit Prescott’s Sister City in Zeitz, Germany. We did this the day after I arrived, and I am hopeful I can do a news story on this wonderful visit after I get back to Prescott.

The second idea I had was to visit the manufacturing facility for Swarovski Optiks, in Absam, Austria. As the owner of Jay’s Bird Barn, I have had a long relationship with Swarovski, as we’ve been selling their binoculars, spotting scopes, tripods and accessories in our store for more than 15 years.

Working through my sales rep in Arizona, a tour of their facility was arranged, and we will be visiting their factory tomorrow! I am so excited to see the process of how the products we sell are manufactured. I have personally been using Swarovski binoculars and spotting scopes for over a decade, and I am convinced that there is not a finer piece of optical equipment for nature observation than Swarovski glass.