Birding: A quick trip to California results in a few birding opportunities 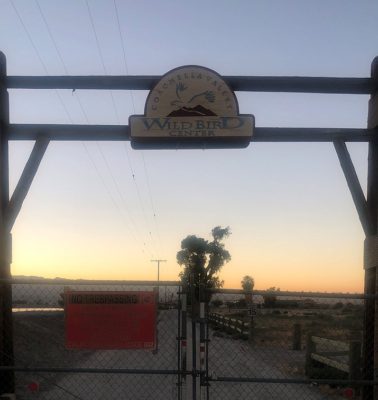 A closed gate greeted me at the Coachella Valley Wild Bird Center in Indio, California when I attempted to go birding there last week. (Eric Moore/Courtesy)

My wife and I made a quick trip over to California last week to attend a memorial service at the Riverside National Cemetery for her 95-year-old uncle. We left early enough Monday morning to drive directly to the cemetery to arrive on time for the 1:15 p.m. event. The service was held outside — and it was in the high 90s. I felt like I was still in Arizona!

As you might imagine — and I’m sure this does not come as a surprise to you — I do a fair amount of ‘birding’ while driving. Looking for birds helps keep me alert and attentive, although it probably wouldn’t be a bad idea to have a big bumper sticker that says, “I brake for birds.” The drive over to California resulted in several good sightings, including greater roadrunner, burrowing owls, loggerhead shrike and prairie falcon.

Following the graveside service, I spent a little time birding at Perris Lake, just to the southeast of Riverside. By Arizona standards, it is a big lake and is surrounded by an arid desert habitat. It is fascinating how you can be in the desert and see a variety of water birds.

For example, I saw both Clark’s and western grebes, Forester’s and Caspian terns, double-crested cormorant, marbled godwit and some gulls. The expression ‘build it and they will come’ certainly applies to the adaptability of wild birds.

None of these water birds would naturally occur in that area, but the manmade lake creates a suitable habitat in the middle of the desert to support these water-dependent species. Ironically, in the surrounding desert scrub adjacent to the lake, I saw greater roadrunner, Nuttal’s woodpecker, flocks of bushtits and Bewick’s wrens—species you would expect to see in the desert.

Leaving Perris Lake, we started our drive back to Arizona before stopping in Indio to spend the night.

After settling in at the hotel, I got onto my eBird account to record the bird species I’d seen earlier in the day. Quite by accident, I discovered there was a bird center, the Coachella Valley Wild Bird Center, only two miles from our hotel!

Needless to say, before getting on the road Tuesday morning, I drove over to the bird center (at 5:30 a.m.) only to discover it didn’t open until 8 a.m. That was disappointing, but I was not deterred. Adjacent to the center was the wastewater treatment plant for Indio, creating an inviting habitat for a number of bird species.

Although Indio is below sea level, it reminded me of birding at Rio Salado in Phoenix. Many of the bird species I saw that morning were the same species one would find along the Salt River in Phoenix — white-winged doves, Gambel’s quail, verdins, northern mockingbirds, Abert’s towhees, Costa’s hummingbirds, green and great blue herons, snowy and great egret, and a burrowing owl colony.

As I spend time in nature, I am continually amazed at how adaptable and resilient nature is. We modify the environment through human development, and birds adapt to and take advantage of the change in environment that occurs as a result of the development. However, even though birds are high adaptable, habitat loss is probably the greatest threat to wild birds and is a serious issue that needs to be continually addressed.

While it was a very quick trip, I’m grateful for the time spent in California. It was great to see and spend time with family, and I added eight bird species to my California eBird list, which now stands at 213 species.