Birding: A fruitful visit to the ‘Thrasher Spot’ 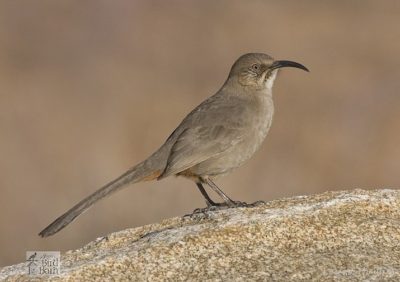 Why is that? Because this particular species of thrasher is secretive and elusive. On Nov. 8, I saw a crissal thrasher in my yard — only the second one I’ve ever seen since moving to this home in 2005! If your yard is filled with native habitat — especially if it is a scrubby habitat—chances are this bird species is in your yard.

Lately I have been hearing the vocalization of a curve-billed thrasher in my neighborhood, but I have yet to see it. This species is not nearly as common (in this area) as the crissal thrasher, but is slowly becoming more common in the quad-city area. The typical habitat for curve-billed thrashers is the Sonoran Desert.

This past Saturday, I visited a place about 40 miles west of Phoenix known as the ‘thrasher spot.’ The habitat is low desert—about 1,000 feet in elevation. The elevation is so low that very few cacti grow there. This location is extremely hot in summer and cold in winter. In fact, when I arrived Saturday morning, it was 30 degrees!

The habitat could best be described as desert scrub. It has a smattering of trees, such as mesquite and crucifixion thorn, but is composed of mostly low shrubs and grasses. Over the years, this location has become well-known by Arizona birders as the place to go to see a variety of thrasher species. I arrived early and walked east until the sun came up so that it would be at my back as I began walking west.

One of the first birds I observed was a Bendire’s thrasher, and I got great looks at it in my scope. Bendire’s thrashers are a species of concern, due to low numbers and habitat loss. As I continued walking, I started seeing sparrows — Brewer’s sparrows and some sagebrush sparrows.

Eventually I moved west across the Salome Highway and found one, then two, and finally a third sage thrasher, along with a few more Bendire’s thrashers. While a scope is usually not necessary for looking at thrashers, it was really nice to get such crisp, clear views of the thrashers and sparrows.

My target bird for this location was the LeConte’s thrasher — an uncommon and difficult to find thrasher — found only in the low deserts of Arizona, California and Nevada. After more than two and a half hours of searching, I hadn’t seen any. But I didn’t give up just yet. I started making my way back towards the car, and, wouldn’t you know it, I found one running, kind of like a roadrunner.

I quickly got my scope on the bird — what a thrill to see! I felt so blessed; my morning was now complete. I continued walking toward the car, and wouldn’t you know it, I found a second LeConte’s thrasher. This one was perched on a low shrub, and I was able to get the scope on it as well.

As I walked back to the car it was as if I were floating. I had a deep feeling of happiness for the success I had enjoyed — three thrasher species and sagebrush sparrows all in one morning! And all four were new for my 2020 Arizona state list, bringing me to a total of 294 species for the year. Will I make it to 300 before the end of the year? Stay tuned.