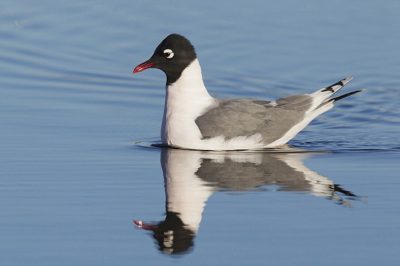 Between Friday and Saturday of this past week, I packed in a lot of birding and saw well over 100 different species. On Friday, I visited Page Springs, Bubbling Ponds and Sedona Wetlands. The highlight of my birding was seeing three different gull species at Sedona Wetlands — ring-billed, California and Bonaparte’s.

Later that same day, I headed out to Willow Lake based on a report of Franklin’s gulls at the lake. I arrived around 5:30 p.m., and there were 12 gulls out on the open water. There were seven ring-billed, a California and four Franklin’s gulls. I was really happy to see four different gull species on the same day!

On Saturday, a friend and I did a big birding day. We left Prescott at 5:15 in the morning, and didn’t quit birding until 6:45 that night. Thirteen and a half hours of birding bliss! Over the course of our day, we drove 210 miles, walked 8.1 miles, experienced a fluctuation in temperatures from a low of 28 degrees in Yarnell to a high of 91 degrees in Wickenburg, and saw 98 species. That is a big day!

Our route was patterned after the week-long NAU Road Scholar birding program that I guided for 10 years. That trip consisted of visiting Date Creek Ranch on day one, Burro Creek on day two, Hassayampa River Preserve on day three, Yarnell and Walnut Grove on day four and Congress on day five.

With the exception of not going to Burro Creek, we did a whole week’s worth of birding in one day. Our first stop was in Yarnell, where we walked the length of Shrine Road and visited Flora May Park. What a productive stop — we saw 30 species in Yarnell.

Our next stop was the town of Congress. This area has some really good Sonoran Desert habitat, making it possible to see desert birds, such as gilded flicker, pyrrhuloxia, white-winged dove, cactus wren, curve-billed thrasher and Inca dove. We saw 26 species in Congress before getting back on the road.

Our next stop was Date Creek Ranch, a holistic working cattle ranch on private property. I had permission to bird on the property, which was fortunate as we added a so many new birds to our day list! We saw six hawk species there — Harris’, Swainson’s, gray hawk, zone-tailed, red-tailed and Cooper’s and two species of falcon — American kestrel and prairie. This location had the highest species count over all of the other places where we birded.

From there we drove into Wickenburg and went straight to the Hassayampa River Preserve, arriving just after 1 p.m. It was the warmest time of day, which does not lend itself to a successful birding adventure, so we really had to work hard to find what we saw, as most of the birds were hunkered down to avoid the heat. We managed to see some great birds, including rufous-backed robin and green heron.

Our last stop was Walnut Grove. We drove out eight to 10 miles and thoroughly enjoyed this beautiful area. Even if you are not a watcher of birds, this is a lovely place for a day trip.

I have a few insights from our day to share. First and foremost — it is very dry out there already. Several of the creeks that would normally have water were bone- dry, which is worrisome seeing how it is only April and our summer monsoon rains are months away. Second, spring migration is definitely underway. We saw hooded orioles, lazuli buntings, kingbirds, flycatchers and several other species indicating migratory birds are on the move.

Eric Moore is the owner of Jay’s Bird Barn in Prescott. He has been an avid birder for more than 50 years. If you have questions about wild birds that you would like discussed in future articles, email him at eric@jaysbirdbarn.com.