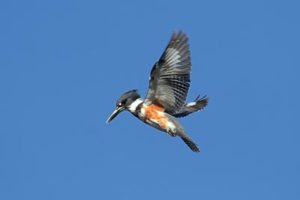 Migration activity is in full swing, as evidenced by the varieties of birds showing up right now in the Central Highlands area. Some are just passing through, while others are settling in for the summer. The month of May is a busy time for answering bird identification questions, as many people are seeing “new” birds in their yard for the first time.

This time of year we receive emails, phone calls and walk-in traffic reporting the appearance of lazuli buntings, Bullock’s orioles, black-headed grosbeaks, and summer, western and hepatic tanagers-just to name a few! Migration is an amazing phenomenon, when you consider the fact that millions and millions of birds are on the move between their wintering range and their summer breeding range.

This past weekend, I had two male Wilson’s warblers actively gleaning in the chokecherry trees in my yard, looking for insects to fuel the next leg of their migration. Most songbirds migrate at night and spend a good portion of the day foraging in preparation for the next night’s journey.

There have been several reports of very unusual bird sightings in the past week-a male rose-breasted grosbeak just off of Willow Creek Road, evening grosbeaks off of Grove Avenue, and a male painted bunting at Dead Horse Ranch State Park in Cottonwood. As evidenced by the recent rarities, sometimes migrating birds get off course and take a left when they should have taken a right-or vice versa.

I saw an unusual bird in my yard this past week-a red-breasted nuthatch in a pinyon pine tree. It even visited one of my suet feeders. I have seen this species in my yard in the past, but never in the month of May. Typically, by this time of year, they have already migrated. I am also seeing mountain chickadees in my yard every day-which surprises me, as I feel they should have already moved up in elevation.

I have recently experienced a big shift in the bird activity in my yard. It was just a few weeks ago that I still had large numbers of Cassin’s finches at my feeders, along with chipping sparrows and some white-crowned sparrows. Then, one day, it was as if a switch had flipped, and all of these birds were gone.

This past week I spent time at Willow Lake on two different occasions. One of these days, I was leading a group of cub scouts on a guided bird walk. It is very rewarding to witness the excitement of eight-year olds as they see a bird through a spotting scope! On my other visit, I saw several yellow-rumped warblers in the brushy habitat surrounding the lake, which seems late, but they will soon be gone.

On Saturday, I led a bird walk at the Highlands Center. While there, I pointed out a house finch nest in a light fixture on the exterior of the building. Just a short walk from the amphitheater was an active Pygmy nuthatch nest. It wasn’t possible to see how many babies were in the nests, but, judging by all of the activity, mom and dad had a clutch of hungry youngsters! Earlier this week I was at the credit union on Gail Gardner, and there was a Say’s phoebe nest in the entryway with several juveniles who looked like they were ready to leave the nest at any moment.

And finally, I received my first report of baby quail in Prescott on Monday, May 4. Since that time, we’ve received several more reports. Be on the lookout!