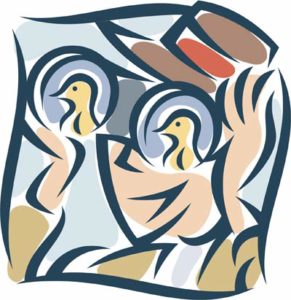 Spring is a very busy time in the bird world. Migration is still underway for many species, and other species are busily building nests, incubating eggs, rearing young and tending to fledglings.

The hummingbird nest that I wrote about several weeks ago (that was right next to the sidewalk in our front yard) has already been vacated. It was amazing to see how quickly the babies matured and grew. While the fledglings are out of the nest, they are still dependent upon their mother for frequent feedings. Throughout the day, I hear the high-pitched squeaks of the babies letting mom know where they are so she can feed them.

This past week I witnessed a female Anna’s hummingbird actively gathering nest-building material in the backyard. I don’t know if she is building a nest for her first clutch of eggs, or if she is working on a nest for a second clutch.

The ravens have been busy in our yard as they tend to their nest, which is way up in a tall ponderosa pine tree. I don’t know how many juveniles are in the nest this year, but the parents are very busy bringing a variety of dead animals to their young.

This past Saturday, I had an interesting experience. Early in the morning, I went outside and was walking around the yard when I discovered a very large dead pack rat. It was bloodied but intact, which seemed strange to me. I couldn’t understand why something would catch and kill it, but not consume it.

I have seen bobcats and coyotes in our yard in the past, and we have had great-horned owls as well. There was also the possibility that the rat was killed by a domestic cat. Regardless of these different possible scenarios, the fact remained that I had a big dead rat in my yard.

My first impulse was to put the rat in the curbside trashcan, but then a little thought crept into my mind – the raven’s nest! I couldn’t help but think that this was a good-sized meal that shouldn’t go to waste. I picked up the rat by the tail and carried it out to the cul-de-sac and laid it on the asphalt right in plain sight where it could easily be discovered by ma and pa raven as they frequented their nest. About a half hour later I went out to check on the rat and, sure enough, it was gone! While I didn’t see what took it, I am hopeful it was the ravens.

Recently the adult ravens have been using the water feature we have in our yard as a dunk-tank for their menu items. When they find some road kill – before taking it to the nest to feed their babies – they take their bounty to our waterfall and pond and dunk the food in the water until it has been thoroughly saturated. At this point they take the moistened food up to the nest to feed their young. It is a pretty ingenious way to bring water to the babies, especially now that the weather is getting warmer.