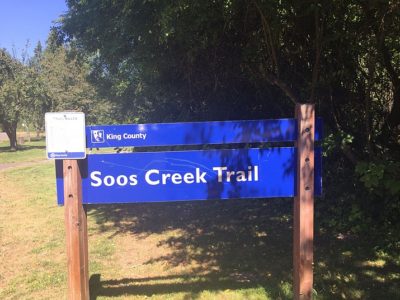 This past week, my wife and I made a trip to Seattle to see our son, Merritt, and his sweet family.  As you can imagine, I made a point of going bird watching every day!  Any time I am in a new part of the country with a unique habitat, there are different birds to be seen.  I am always hopeful of seeing something new for my life list, which doesn’t happen very often in Prescott.

We spent time in several different communities, including Seattle, Renton, Kent, Puyallup and Duvall.  As you might imagine, I had my binoculars with me everywhere we went.  Day trips included a four-mile hike along the Snoqualmie River to a place called Twin Falls, as well as visiting the Northwest Trek Wildlife Park where we saw caribou, elk, bison, bear, beavers, otters, martins, and other wildlife.

My favorite place to bird—and I went there twice a day sometimes—was the Soos Creek Trail, which was very close to where we were staying.  Interestingly enough, my birding turned up a lot of the same species we encounter right here in Prescott—Cooper’s hawk, Anna’s hummingbird, northern flicker, western wood-pewee, bushtits, Bewick’s wren, black-headed grosbeaks and spotted towhees, just to name a few.

It is so interesting to see the difference in plumage of the birds in the Pacific Northwest that are the same species of birds we see here in the Intermountain West.  Not only did they look different, they also sounded different.  The spotted towhees were really throwing me off until I finally saw one vocalizing and was able to put the bird and the call together, as it did not sound anything like the vocalization we hear here in Prescott.

I also saw a lot of bird species that either pass through the Central Highlands area of Arizona as spring and fall migrants or winter here and spend their summers in Washington.  For example, I saw golden-crowned kinglet, cedar waxwing, orange-crowned warbler, Wilson’s warbler, white-crowned sparrow, dark-eyed junco and American goldfinch.

One bird I was hoping to look for on this trip was mountain quail, but the opportunity never presented itself, so I have yet to see this species.  However, I did add a new bird to my life list which was such a fun experience.  I think it is only the second new bird I have added to my North America life list this year.

We were in Duvall visiting extended family.  We were standing out in the middle of the street in front of their house watching the kids ride their bikes when I saw a small bird flying very swiftly.  I knew the Pacific Northwest had a species of swift that I had never seen—a Vaux’s swift.  It was flying pretty high, and its flight pattern definitely was swift-like.  Unfortunately, at that precise moment my binoculars were sitting on the counter inside the house.

I ran into the house, grabbed my binoculars, and raced back out into the middle of the street, but the swift was nowhere to be seen.  For the next hour or so I scanned the skyline, looking for swifts, and finally got a look at one that was a considerable distance away.  Not a great look, but sufficient to count it.  Later, as we were literally standing in the street giving hugs and saying our goodbyes, I saw another swift.  This one was much closer, and I was able to get my binoculars on it and confirm with one hundred percent confidence that it was indeed a Vaux’s swift.  I was very happy in that moment.