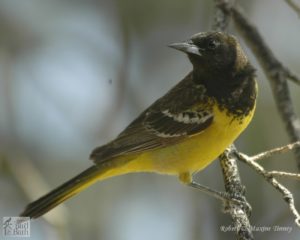 A significant change in the local bird population occurs during the month of April. Unlike the last several months when the variety of birds occurring in the area has been fairly stable, during April you will begin to witness a tremendous shift in species, with winter varieties leaving and summer residents returning. Here are a few examples.

Last week I received emails from a friend who lives off of Old Black Canyon Highway. Last week she saw in her yard all three oriole species that typically occur here: hooded, Scott’s and Bullock’s. I also received a notice on my Jay’s Bird Barn Facebook page from a customer who lives in Cleator. She has lazuli buntings in her yard already!

On Tuesday of this week when I went over to Sedona, I saw two black hawks on State Highway 89A in Cottonwood, right by the bridge that spans the Verde River. A few miles later as I passed the Sedona “wetlands” habitat (aka water reclamation facility) I saw eight gulls! Later in the day as I was coming home I saw several turkey vultures. I have also seen black-chinned hummingbirds in my yard this week.

This should give you an indication that wild birds are on the move, winging their way northward. Perhaps you have already noticed the lack of dark-eyed juncos in your yard, and fewer ruby-crowned kinglets and yellow-rumped warblers. Things are hopping, but then again, it is almost Easter!

If you are working on your bird count for the Centennial Challenge, it is critical to get out and go birding during this time of transition. Participating in some of the many guided bird walks that are coming up should help add new species to your year list. The group that went out this past Saturday got wonderful looks at a painted redstart – that is a species I have yet to see this year.

Here are some of the birding opportunities in April:

• The Verde Valley Birding and Nature Festival at Dead Horse Ranch State Park in Cottonwood begins Thursday, April 26, and runs through Sunday, April 29. This is an excellent opportunity to attend workshops, seminars, and guided bird walks to premier birding destinations all over central and northern Arizona. To register, visit www.birdyverde.org.

• Jay’s Bird Barn will be leading free guided bird walks Friday, April 6, to Watson Woods; Wednesday, April 11, to the recharge ponds; and Wednesday, April 18, to Granite Basin. Space is limited, so call 443-5900 to reserve a place. If you don’t have a pair of binoculars, come anyway and we will let you borrow a pair – we want everyone who wants to go birding to have the opportunity.