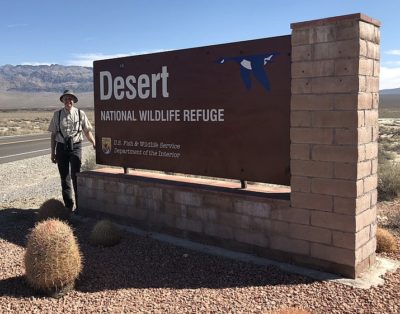 When you think of Las Vegas, bird watching may not be one of the first things that comes to mind. But several months ago, I was invited to present a program this month for the Las Vegas Red Rock Audubon Chapter, so I headed up to Vegas, tacking on an extra day in my schedule to make time for some bird watching.

Prior to my trip, I was asked if I had any ‘target’ birds I was hoping to see there. Upon reflection, I began to wonder whether it might be possible to see a LeConte’s thrasher in the Vegas area. I checked range maps in the iBird Pro app on my phone, and it showed this species was, indeed, in that area.

I emailed my ‘wish list’ of a LeConte’s thrasher, and by the time we arrived a field trip had been arranged in hopes of seeing this elusive bird. Over many years and in many places, I have searched in vain for a glimpse of this species. In spite of all of the years I have devoted to bird watching, it had eluded me.

Getting through Vegas, itself, was a chore. Massive freeway construction is taking place, but eventually we got on 95, headed north. Our destination was Desert National Wildlife Refuge, a 1.3 million acre wildlife refuge that includes Corn Creek.

In the valley — nestled between sky islands, snow-covered Charleston Peak at 11,916-feet in the Spring Mountains to the west and Hayford Peak at 9,924-feet in the Sheep Mountain range to the east — is an expense of desert that, at first glance, appears inhospitable, but then you look closer, deeper.

We began our search in the desert scrub, where it was obvious there hadn’t been much rain this winter. The dirt was dry, and walking through the area created billows of dust. As we walked, however, we started seeing birds. One of the first we saw was a juvenile golden eagle.

Next we then spotted several Bell’s sparrows, a western meadowlark, a red-tailed hawk, and eventually, yes, a LeConte’s thrasher! And then another and another.

It is a special experience to see a new bird for the first time, especially when it is a species for which you have been searching a long time. And these thrashers were cooperative; each was perched near the top of vegetation, where we were able to get a scope on them and get good looks. One of the thrashers was vocalizing while we had it in the scope, which added an additional measure of enjoyment, to both see and hear the bird.

Before leaving this area, we added another species to our day list— an early Swainson’s hawk. Then we drove, probably less than a mile, to the visitor’s center for the refuge. The facility is near Corn Creek, a small spring-fed riparian area. I highly recommend visiting there.

Our time was somewhat limited, but we walked several of the trails at the site and compiled a diverse list of bird species. One highlight was seeing white-crowned sparrows, white-throated sparrows and golden-crowned sparrows. The only other time I have seen all three of these species together was in New Mexico, when I went to Bosque del Apache National Wildlife Refuge.

Needless-to-say, I enjoyed my timing birding in the Vegas area. For any interested in making a birding trip there, I can provide contact information for guides in the area.

Eric Moore is the owner of Jay’s Bird Barn, with three locations in northern Arizona – Prescott, Sedona and Flagstaff. He has been an avid birder for more than 50 years. Email questions about wild birds to eric@jaysbirdbarn.com.