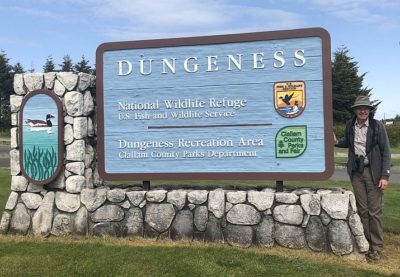 This past week, my wife, Gayla, and I visited our son Merritt and his family in Renton, Washington. They live in an apartment complex along Maple Valley Highway next to the Cedar River. Birding is as easy as looking out their window where an active Bald Eagle’s nest is in plain sight.

Birding in the Puget Sound area is not the same as birding in Central Arizona. While the trees near Puget Sound are very impressive, they makes it a lot harder to see birds.

In my column last week, I wrote about a close encounter with a bobcat. This week I had an awesome black-bear sighting in Duvall, Washington. Other than seeing bears in Yellowstone National Park, this is the first time I’ve seen a bear in the wild.

As I spent time bird watching in Washington, I noticed a difference in dialect among the birds use in Washington, compared to birds of the same species observed in other parts of the country. Like many birders, I, too, rely on vocalization to identify birds. This past week, I learned new vocalizations for some of the same bird species we see in Prescott.

For example, white-crowned sparrows are a common winter resident in Prescott and are a breeding species in the Pacific Northwest. Even though these sparrows look the same, they sound completely different in these different locations.

The first time I heard one singing in Washington, I had no idea what I was hearing until I tracked it down. Once I saw the bird and heard the song, I put the two together and was able to lock into my memory the new song for this very familiar species.

Another bird species that has thrown me off is the spotted towhee. This is a very common species, both in Prescott and in the Pacific Northwest, but their call notes and songs would make you think you were hearing two completely different bird species.

I enjoy the opportunity to bird in a different part of the country as it provides me with the chance to both see and hear birds that I have not seen in a long time or, in some cases, have never seen. This week, I saw something entirely new, which doesn’t happen very often!

One of our day trips was to the Dungeness National Wildlife Refuge, located in the North Olympic Peninsula, where I saw probably a hundred or more rhinoceros auklets in the Strait of Juan de Fuca. What a thrill to see in the wild a bird species I have seen only in bird books for more than 50 years!

Another special sighting was seeing pigeon guillemots. This is a water bird closely related to auks, murres and puffins. It was amazing to see these water birds up on a cliff face, sharing their nesting habitat with northern rough-winged swallows!

One advantage of birding in this day and age is access to technology. For many years I have used an app on my smart phone called iBird Pro. It has sorting features with likely birds to encounter in a specific location, as well as vocalizations and range maps. Using technology can be a great identification tool when bird watching.