Bird-spotting efforts ramp up as Centennial Challenge winds down 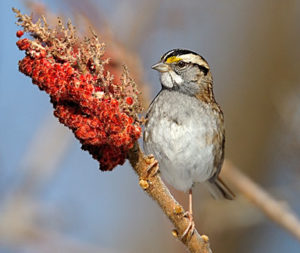 The year is winding down to a close very quickly, and I am feeling the need to get out and see more “new” birds before the 2012 Centennial Birding Challenge comes to a close on the 31st of December.

I am pleased to announce that I added another species to my state list on Tuesday of this week. I was working at the Sedona Jay’s Bird Barn and, on my lunch hour, I went to a private residence where they have been seeing a white-throated sparrow (not a white-crowned sparrow).

It was mid-day when I arrived, and I sat on the back porch hoping the bird would make an appearance. When I arrived, the yard was pretty quiet, but the bird activity soon picked up with a variety of common backyard birds foraging for food down on the ground.

At first, I was seeing a lot of white-crowned sparrows, house sparrows, house finches and a canyon towhee. Then, it suddenly appeared – a beautiful specimen of an adult white-throated sparrow. The white on the throat really stood out and the yellow on the lores (the area between the beak and the eye) was so bright. It was such a pretty bird!

Needless to say, I was very happy to add this bird to my 2012 state list. I have been hunting for this species for a long time, and to finally see it was thrilling.

This was the 16th sparrow species I have seen in the state of Arizona so far this year! I am still missing another five sparrow species that I should have gotten earlier this year. When I was in southern Arizona over Thanksgiving weekend, I was hoping to see some of the sparrow species I am missing, but I struck out on a lot of those target birds.

Interestingly, when I saw the Arizona woodpecker in Madera Canyon the day after Thanksgiving, this was the thirteenth woodpecker species I have seen in Arizona this year. That number really impresses me, as I think most people outside of Arizona would not suspect that we have such an amazing diversity of woodpeckers in Arizona. Our varied habitats throughout the state contribute to the diversity of species found here.

I am woefully lacking numbers in other categories, though. I embarrassingly admit I have seen only one owl species this year – the great-horned owl. My list of gulls is equally lame – I have seen only one species – a ring-billed gull. I have no terns on my list, which is terrible!

In spite of all of the birds I have seen (I am now at 231 species for the year), I am missing a lot of birds that I could have seen had I visited different parts of the state at the appropriate season. For example, I should have visited southeastern Arizona in August to hit the peak of hummingbird migration. My failure to do this cost me probably eight hummingbird species that I did not get on my list this year.