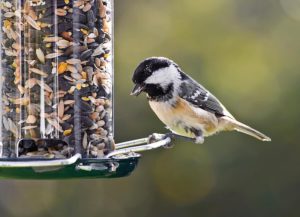 On Wednesday of last week, we opened a new Jay’s Bird Barn location in Flagstaff. Needless to say, I have been spending a lot of time in Flagstaff over the last few weeks and it has been interesting to see firsthand the varieties of birds that occur at this elevation, in a predominantly ponderosa pine habitat.

Any bird watching in Flagstaff up to this point has been at the store which is in a shopping center setting. As you might imagine I see a lot of common ravens every day, but I also see a lot of American crows. In the twenty five years I have lived in Prescott I have only see a crow one time! Crows, however, are abundant in Flagstaff, perhaps as common as ravens are here.

I have seen pygmy nuthatches in Flagstaff along with mountain chickadees, dark-eyed juncos and I have seen evening grosbeaks flying over the parking lot on several occasions. This is a species we don’t see very often in the Prescott area.

Feedback from customers highlights the many differences between bird species in the Prescott, Sedona and Flagstaff areas based on habitat. It is interesting how in the first week of being open I have had requests from two different customers wanting a purple martin house. This is a product we have never carried in either the Prescott or Sedona stores.

Some of the bird species that are common in Prescott and Sedona do not occur in Flagstaff, such as Gambel’s quail. Prescott and Sedona have an abundance of quail, particularly in chaparral and pinyon/juniper habitats. Quail are very cover dependent, they like habitats with vegetation that grows low to the ground. Much of the ponderosa pine forest that surrounds the Flagstaff area lacks low-growing scrubby bushes, effectively excluding quail.

Each different habitat in northern Arizona, whether it is grassland, chaparral, pinyon/juniper, riparian, or ponderosa pine forest supports the foraging behavior of the different bird species that occur there. A homeowner in Flagstaff is going to have a different mix of birds compared to a homeowner in Sedona.

It is important to provide the proper feed for the bird species that occur where you live. It doesn’t make sense to provide a generic bird seed blend regardless of where you live. Most wild birds have unique food preferences. As you have probably experienced in your own yard, birds will pick through the bird seed mix you provide them, eating their preferred seed ingredients while kicking out of the feeder all of the ingredients they do not want, which ends up down on the ground.

The key to attracting a wide variety of birds to your yard is to tailor the feed you are providing to the birds that naturally occur in your area. For example, if you live in a high desert grassland environment, such as Poquito Valley north of 89A, then it doesn’t make sense to provide a bird seed blend suited for birds in a forested habitat.

Providing food, water and shelter, along with landscaping with native trees and shrubs, is the most effective way to create a yard that is wildlife friendly and inviting to birds—whether they are year-round residents, or migratory birds that are just passing through.